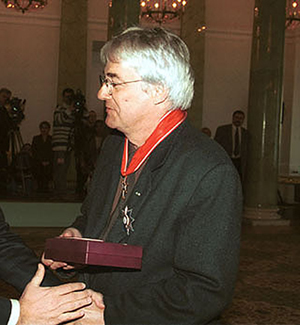 Żuławski was an assistant of . When his second film "Diabeł" was banned in Poland he decided to move to , where he made "L'Important c'est d'aimer" (1975) with .

After returning to Poland he worked for two years on a film which the authorities did again not allow him to finish ("On the Silver Globe"), the movie was based on a book written by his great-uncle . Since then he has lived and worked mostly in , making successful Fact|date=February 2007 art films.

Being a maverick who always defied mainstream commercialism, [http://www.commercialalert.org] Zulawski enjoyed success mostly with the European art-house audiences. His wild, imaginative,and controversial pictures have received 16 awards at various international film festivals. He alsowrote the novels , (a.k.a: ), V , and
.He is also well-known for his relations with very beautiful women. He has been in a relation for 15 years with French actress with whom he has done his last movie .