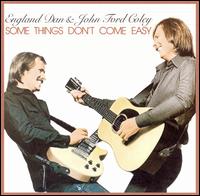 "Some Things Don't Come Easy" is the sixth album by the pop rock duo .