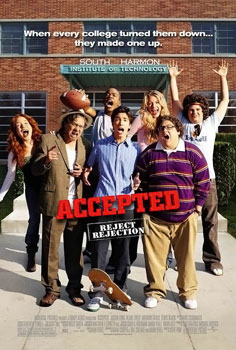 "Accepted" is a 2006 . The plot centers around two groups, one of which is a group of s, who after being rejected from all the colleges to which they had applied, proceed to "create" their own "college". The other group is composed of fraternity freshmen who attend a prestigious university nearby.

The plot adversity is created through a situation where the Dean of the nearby prestigious university attempts to use one of his students to assist him in this endeavor to acquire adjacent and abutting realty to expand its campus to create an adjacent park-like expanse, and the recalcitrant upstarts whose "college" (housed in an abandoned psychiatric hospital) begins to flourish and who refuse to facilitate the sale of their leasehold to the university. They call their college "South Harmon Institute of Technology" ("S.H.I.T.") and proceed to develop a facility, a curriculum, and a faculty, and thereby ultimately are accorded provisional accreditation by the state board of education when this is satisfactorily demonstrated.

Though presented as a light comedy, the film's undertone throughout is highly critical of the U.S. college system (and the college ranking system).

The plot begins with Bartleby Gaines (), a persuasive high-school senior who, among other pranks, creates s. He is stunned when he is rejected by every college he applies to. In an attempt to seek approval from his father (), who believes that Bartleby is doomed to fail in society if he doesn't get into college, Bartleby creates a fake college, the South Harmon Institute of Technology. He is aided by his friend Sherman Schrader III (), who has been accepted into the prestigious Harmon College, and fellow rejects Rory (), Glen () and Hands ().

Bartleby takes steps to facilitate his very thorough father. He has Sherman create a fully-functional website. Arriving at the conclusion that a campus is required to continue the ruse, Bartleby leases an abandoned psychiatric hospital adjacent to the campus of Harmon College and renovates it to look like a college campus. When his father insists on meeting the Dean, he hires Schrader's uncle, Ben Lewis (), to play that role.

The seemingly innocent ploy quickly spins out of control when the website which automatically accepts any applicant, enrolls hundreds of students after their attempts to enter other colleges were similarly rejected. Bartleby realizes that these people have nowhere else to go, and so lets them believe that the school is real. After being disenchanted with the status quo, he has the students make up their own classes and be their own teachers.

Meanwhile, the Dean of the nearby Harmon College, Dean Richard Van Horne (), makes plans to construct the Van Horne Gateway, an adjacent park-like "buffer zone to keep knowledge in and ignorance out". He dispatches Hoyt Ambrose () to free up the nearby properties in preparation. When Bartleby refuses to relinquish the lease for the South Harmon Institute of Technology property, Hoyt sets to work trying to reveal the college as a fake. In a sub-plot, Bartleby also vies with Hoyt for the affections of Harmon College student Monica ().

Hoyt manages to expose South Harmon Institute of Technology as a fake school through Sherman, who is attempting to join his fraternity. After having Sherman beaten up, Hoyt forces him to hand over all the files he has created for the Institute. He then contacts all the students' parents to expose the school as a fake. The Institute is quickly shut down, but Sherman had taken the initiative to file for accreditation beforehand, giving Bartleby a chance to make his school legitimate.

At the accreditation hearing, Bartleby makes an impassioned speech about the failures of conventional education, convincing the board to grant his school a one-year probation to test his new system. The Institute is started up once again, with Sherman and Monica now attending. In the final scene, Dean Van Horne's BMW explodes as he walks towards it. The camera pans to a shocked Bartleby and another student () who had wanted to learn to "Blow shit up with my mind", who says "Told ya!"

Other songs not included on the soundtrack:
*"" by plays in Bartleby Gaines room whenever the disco ball comes down
*"Holiday" by . There has been some confusion over the fact that Weezer and Green Day each have a song by the title "Holiday" in the movie, but only the Weezer song is on the official soundtrack.

*"" by is played at a party held at South Harmon, and Bartleby sings the majority of it on stage. The DVD also featured a music video of the song featuring the casts and crew.
*"Don't Stop" by is played during the high school graduation party.

The movie was released on VHS and DVD on November 14, 2006, in both Widescreen and Fullscreen.