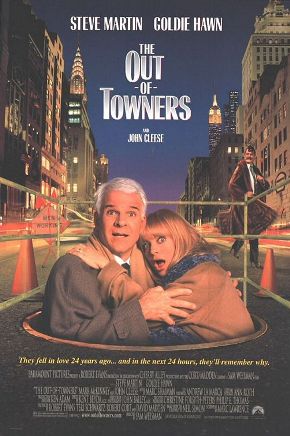 There are subtle differences from the original, such as the couple's credit card being declined at the hotel (instead of their room being given away as in the original), but the script is largely faithful to the 1970 version. The remake also has the addition of as Mr. Mersault, the Hotel Manager, a character similar to the one Cleese played in the television series . Most of the differences are due to the talents of Hawn and Martin, who are both mainly comedic actors with very individual styles (the 1970 film had Jack Lemmon and Sandy Dennis playing their roles very seriously, largely the source of many of the film's laughs). Consequently, the 1999 film stands alone as a Hawn and Martin collaboration, rather than as a comparable remake of an already successful film.

The movie was a disappointment critically and commercially. It has a 22% rating on the website [http://www.rottentomatoes.com/m/1087047-outoftowners/] , with commenting that the movie "was not a proud moment in the often-inspired careers of Martin and Hawn." [http://rogerebert.suntimes.com/apps/pbcs.dll/article?AID=/19990402/REVIEWS/904020302/1023] Most of the negative reviews point to Cleese as the only redeeming factor of the film. The film had a budget of $75 million, but grossed just $29 million in the US, and $33 million worldwide [http://www.boxofficemojo.com/movies/?id=theout-of-towners.htm]