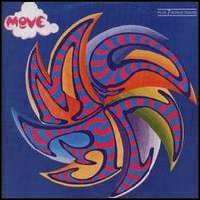 "Move" is the eponymous debut album by , released on the label. The only one which was recorded by the group’s initial line-up before bassist Ace Kefford left, it includes both sides of their third and fourth singles ('Flowers In The Rain' and 'Fire Brigade'). The last track, 'Cherry Blossom Clinic', was intended as a single at the end of 1967, and an acetate, with 'Vote For Me' (a song which remained unreleased until 1997), was pressed. Release was cancelled, as the lyrics were about the inmate of a mental home, and in the wake of the controversy which had dogged 'Flowers In The Rain', with its promotional postcard featuring an allegedly libellous drawing of , it was felt that to risk further allegations of bad taste and scandal would harm their career irreparably.

The remainder of the album consisted of originals, and three cover versions that had featured prominently in their live set. 'Weekend' was an song, and 'Hey Grandma' had originally been recorded by US psychedelic band . 'Zing Went The Strings Of My Heart' was an old James F. Hanley standard, with an arrangement copied from . It was their only album to chart, reaching No. 15.

It was later reissued on CD with additional tracks in 1998. It was then reissued in a deluxe two disc package in 2007 by Salvo.