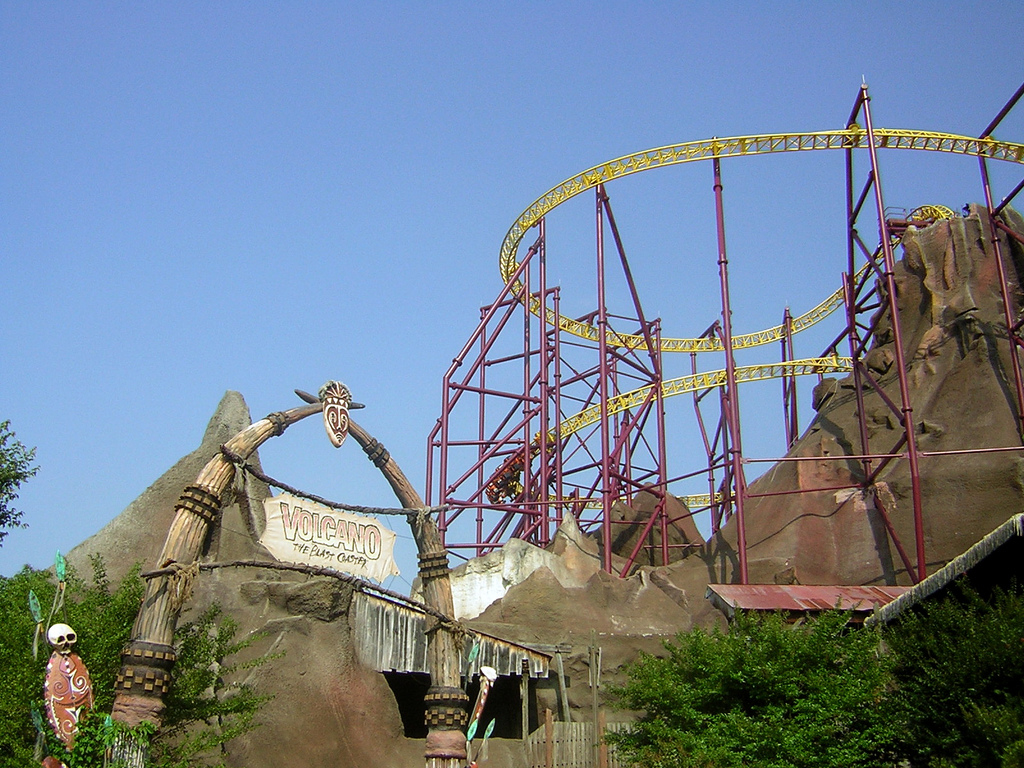 Volcano, The Blast Coaster, or "Volcano", is the launched at . It is one of the most popular rides there since its opening on , . It is a custom designed ride designed by Paramount Parks and famous roller coaster designer Werner Stengel. The ride was built by of . At opening, the ride became the world's first LIM (Linear Induction Motor)-Launched Inverted coaster and to this day, remains to be the world's only full-circuit launched inverted coaster.

The mountain this ride is built in and around has existed since . A number of attractions were set inside the mountain before Volcano existed.

In 1979, back when the park was simply "Kings Dominion", the park constructed a 17-story tall mountain to be a part of the expansion of the Lost World/Lion Country Safari sections (defunct). The mountain housed four attractions aimed at families. A log flume ride was built called Voyage to Atlantis. The second attraction was a Rotor flat ride called Time Shaft. The third ride housed inside the mountain was a small roller coaster called Land of the Dooz. In addition, Mt. Kilimanjaro, a "Bayern Curve" type flat ride, was located within the Lost World section and included similar theming to the Lost World mountain.

Throughout the 1980s, some major attractions were removed from the area, which included the nearby King Kobra coaster (which sat where Anaconda's lift hill is today), the monorail, and the Lion Country Safari. The removals didn't influence ridership and caused the renaming of the section from Lost World to Safari Village. Two of the rides were rethemed to refresh the mountain in the 1980s. First, the Land of the Dooz roller coaster was rethemed to Smurf Mountain and the Voyage to Atlantis ride was changed to Haunted River, with theming similar to Disney's . In the early-mid 1990s, Mt. Kilimanjaro (the ride) was removed. The early 1990s came around and Smurf Mountain was removed in 1993. In 1995, the mountain sat dormant when the rest of the rides were removed.

In 1993, bought the park, renaming it Paramount's Kings Dominion. Paramount wanted to bring movie themed attractions to the park after the latest films. Plans were drawn up to revitalize the mountain with a new attraction themed after the 1995 movie "Congo". fortunately, the movie bombed and nothing came out of the plans other than renaming the Safari Village section into "Congo". Nothing happened to the mountain until 1997, when holes, caves, and a repaint of the mountain occurred for the installation of Volcano.

Older park visitors still refer to the mountain as Smurf Mountain, younger guests call it the Volcano after the current ride.

In late 1997, Volcano: The Blast Coaster was announced. LIM technology was still somewhat new and the ride had many bugs in the launch system. However, this issue wasn't new with the park, especially with Flight of Fear nearby. After most of the summer days were gone by, Volcano finally had a soft opening on August 3, 1998. The ride then officially opened on , as the park's new star attraction. During the 1998 season, the ride operated at half-capacity, with every other row being loaded. In , the bugs were fixed and Volcano was running at full capacity. In , Volcano's structure was given a fresh coat of paint.

Volcano's layout is based on a . Upon boarding one of three trains at the base of the mountain, riders make a slow turn left out of the station. The train then moves into its first of two launch tracks, which accelerates the train to 73 miles per hour. After making a sweeping 200-degree turn behind the mountain, the train enters the second launch tunnel, followed by a vertical section ending in a "roll out" element. The "roll out", similar to a sidewinder, is essentially a vertical section of track followed by a quarter loop to bring the train completely upside down, then a loose half-corkscrew. According to , the roll out element is unique to Volcano. [ [http://www.rcdb.com/ir.htm?element=61 Roller Coaster Search Results ] ] The highest point of the roll out is 155 feet above ground level, making it the tallest inversion at Kings Dominion, taller than Dominator's 135-foot vertical loop. After the roll-out, the train makes a sweeping turn around the mountain followed by a heartline roll in midair. The train makes another turnaround and passes through a second heartline roll, which is embedded into the side of the mountain. After another turnaround and a third heartline roll, the train makes a turning, 80-foot drop into the final brake run. [ [http://www.coaster-net.com/ridegallery.php?action=display&id=139 COASTER-net.com v8 > Ride Gallery > Volcano: the Blast Coaster, Kings Dominion ] ]