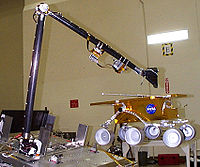 By December 15, 2010 the orbiter broke the record for longest serving spacecraft at Mars, with 3,340 days of operation, claiming the title from NASA's Mars Global Surveyor, which had arrived sooner than Odyssey but failed in 2006.[1] Some other active orbital missions during this period include Mars Express (since 2003) and Mars Reconnaissance Orbiter (since 2006), in addition there were a few landers and flybys.