The Mistress of Spices (film)

The Mistress of Spices (film) 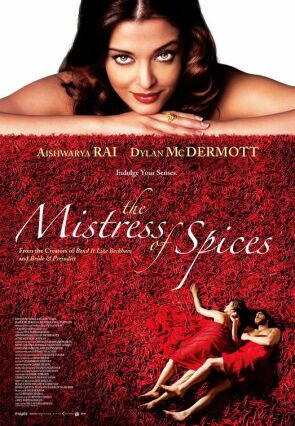 "One spice for passion. And one woman who knows its name."

Tilo () is an immigrant from India, and a shopkeeper, who is also the "Mistress of Spices." The spices which she gives to her customers help them to satisfy their needs and desires. Her life changes when she falls in love with Doug (), an American man.

Tilo is initiated as one of several Mistresses of Spices by a First Mother (Zora Sehgal) who warns them about rules they must follow, or face consequences. They are instructed never to leave their respective stores all around the world, touch the skin of the people they meet or use the spices to their own ends. Tilo ends up in San Francisco in a store called "Spice Bazaar".

Tilo's customers include Haroun, a cab-driver from Kashmir (), a grandfather () dealing with an American-born granddaughter Geeta (), Kwesi, a man trying to impress his girlfriend () and Jagjit, a teenager trying to fit in at school (Sonny Gill Dulay). Her life takes a turn one day, when a man on a bike crashes outside her store. Tilo tends to Doug's injuries, while trying to ignore her attraction to him.

This burgeoning friendship soon starts to manifest in things going sour in her relationships with her other customers. Haroun gets in an accident, Geeta's family situation does not improve, Jagjit falls in with the wrong crowd at school, Kwesi's girlfriend breaks up with him and Doug finds out that his mother has passed away.

Tilo recognizes that the source of these misfortunes is her breaking of several rules. So she goes all out to help her customers one last time and gives herself a final night with Doug. She then closes the store and attempts to leave San Francisco. But the First Mother arrives and tells her that she has proved her devotion to the spices and that they will never desert her again. She reunites with Doug.