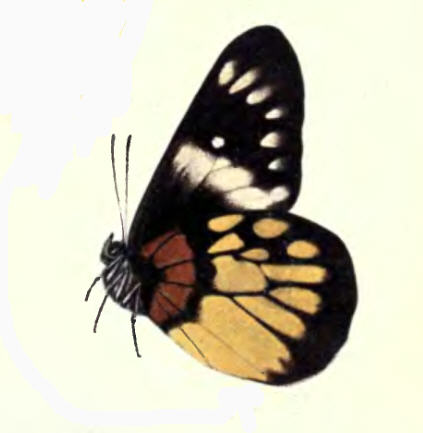 "Delias thysbe", the Redbreast Jezebel is a medium sized of the Family Pieridae, that is, the Yellows and Whites.

:"See glossary for terms used"Resembles "" in both sexes ; the differences are as follows : Upperside, fore wing : the white spot at apex of cell replaced by an upper and a lower grey scaled spot that crosses the discocellulars, which are black ; the postdiscal series of hastate spots converted into broad greyish diffuse streaks of which the streak in interspace 3 is shifted more inward than the others. In the rf the broad subbasal greyish streaks in inter- spaces 1 and 2 and in the cell are longer than in the female. Hind wing black ; basal area to middle of cell deep vermilion, traversed by the black veins ; interspaces la. 1 and posterior medial portion of 2 powdered thickly with greyish-white scales in the male; remainder of interspace 2 bright yellow ; interspaces 3 to 8 with broad diffuse grey streaks that do not reach the termen, the streaks in interspace 5 extend into apex of cell ; in female similar, but inter- spaces 2 to 5 with still broader yellow streaks, of which those in interspaces 4 and 5 cross over the discocellulars into the apex of the cell. Underside : similar to the upperside, the grey markings paler, almost white ; hind wing in both sexes with the basal vermilion patch extended to the base of the dorsal margin : humeral angle at base of wing with an ochraceous spot ; apex of cell and broad streaks in interspaces 1 to 8 yellow fading to yellowish-white anteriorly : the veins narrowly black, which colour broadens triangularly at their apices and so forms anteriorly a more or less irregular terminal black margin. Antennae, head, thorax and abdomen as in "D. aglaia". [Bingham, C. T. 1907. Fauna of British India. Butterflies. Vol. 2]