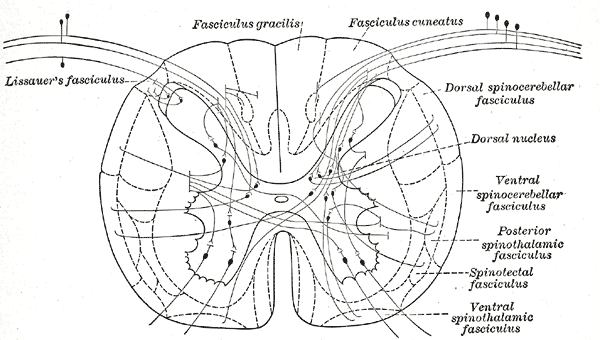 Caption = Diagram showing a few of the connections of afferent (sensory) fibers of the with the from the ventral column and with the various long ascending . (Dorsal nucleus labeled at center right.)

Clarke's column (column of Clarke, dorsal nucleus, posterior thoracic nucleus) is a group of s found in , also known as the intermediate zone, of the .

It occupies the medial part of the base of the and appears on the transverse section as a well-defined oval area.

It is represented, however, in the other regions by scattered cells, which become aggregated to form a cervical nucleus opposite the third cervical nerve, and a sacral nucleus in the middle and lower part of the sacral region.

Nerve cells in Clarke’s column are most abundant between the lower thoracic and upper lumbar segments. Cell bodies are of medium size and oval- or pyriform-shape. Some cells can be as large as anterior horn cells; the nuclei of these larger cells are often found on the periphery of the cell.