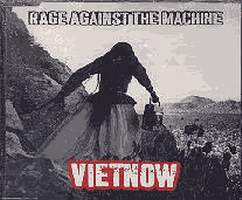 "Vietnow" was the final single for 's "Evil Empire" album. Officially it is only the third single from the album, as was a promo release only.

The cover photograph of an elder lady seen from the back, carrying a radio and walking down a mountain was taken by the Mexican photographer in the in 1979. The original photograph is called "Mujer Ángel" and has also appeared in the black and white photography book "" as compiled by .

The song's lyrics concern right-wing shows, hosted by people such as , , and . One of the riffs bears a resemblance to "" by , whom has cited as a major influence.

"Vietnow" also contains numerous references to . Among these are "shut down the devil's sound", "undressed and blessed by the Lord", "evil angel's lists" and "is all the world jails and churches". Part of this is presumably due to the , and the abundance of right-wing radio show hosts.

The line "comin down like bats from Stacey Koon" is a reference to Sgt. , one of the 4 policemen videotaped beating black motorist in . He and were the only two convicted of the four.