The Russo-Swedish War of 1495–1497 was a result of an alliance between Ivan III of Russia and Hans of Denmark, who was waging war against the Sture family of Sweden in the hope of regaining the Swedish throne. It is believed that Hans promised to concede some stretches of Finnish lands to the Russian monarch, although he did not bother to honour the agreement after he had been crowned King of Sweden at the close of the war.

Pursuant to the agreement, Ivan III sent Princes Daniil Shchenya and Vasily Shuisky to lay siege to the Swedish castle of Viborg. The siege lasted for three months and ended when a castellan set his supply of powder on fire, thus "scaring the Muscovites out of their wits", as the Swedish records say (see below for details). The following year Russian generals Vasily Kosoy and Andrey Chelyadnin severely devastated Swedish Finland as far as Hämeenlinna (Tavastehus). Another detachment sailed along the shore, forcing the Finns into subservience.

Sten Sture the Elder, who was then at Turku (Åbo), was enraged at the news of the Russian expedition and sent Svante Nilsson with 2,000 men to take Ivangorod, a new fortress which Ivan III had built to protect Russian Ingria against Livonian Knights. The fortress was taken without difficulty, but — as it was obviously impossible to defend it for a considerable period of time — Svante Nilsson proposed to hand it over to the Knights, an offer which they declined. Thereupon the Swedes set the fortress ablaze and sailed home.

After the Swedish throne fell to Hans of Denmark, hostilities were suspended until 1508, when Sweden and Russia ratified a peace treaty for 60 years. Although the war yielded no tangible results to any of the belligerents, both countries corroborated the peace settlement in 1513 and 1524. 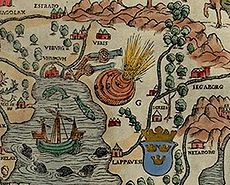 Olaus Magnus included the Vyborg blast in his 1536 Carta marina.

The memory of the immense explosion in the Viborg Castle on 30 November 1495 survived in Finnish, and Russian, folklore. Probably some of the following stories are later inventions. A contemporary popular poem narrates the story of this blast.

The defense of Viborg was led by its castellan, Lord Knut Posse. Russian invaders were just about to conquer the town. According to folklore, Knut Posse had caused the blast with some sort of exploding mixture. Other stories allege that the phenomenon was a figure shown against the sky and depicted for example the X-formed cross of St. Andrew.

There are different opinions of the historicity and the real events of this phenomenon. There were only a couple of thousands soldiers on the Swedish side and defenders attempted to recruit peasants to add to their number. The first Russian attacks were successfully repelled, but in late November, the Russians attacked with all their forces. The battle seemed lost. The attackers had succeeded in reaching tops of walls and several towers were in their power. After that, something happened which caused Russians to retreat.

One story narrates that Knut had a powder mine or tar barrels under one tower, which he detonated. Russians alive after the explosion would not have known what happened and escaped in great fear. Another story tells of Russians escaping because they became afraid of a light phenomenon on the sky. 30 November is the feast of St Andrew and they thought the saint was protecting the town, making them halt the attack.