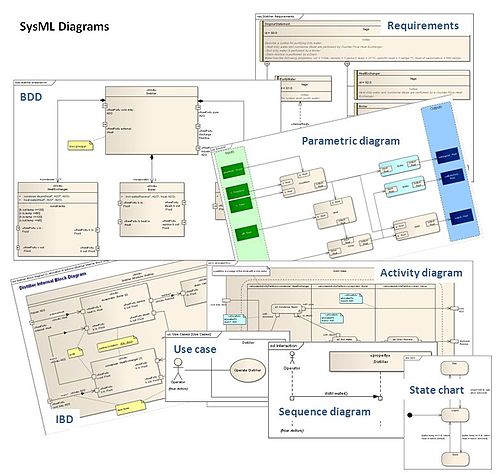 The Systems Modeling Language (SysML) is a general-purpose modeling language for systems engineering applications. It supports the specification, analysis, design, verification and validation of a broad range of systems and systems-of-systems. SysML was originally developed by an open source specification project, and includes an open source license for distribution and use.[1] SysML is defined as an extension of a subset of the Unified Modeling Language (UML) using UML's profile mechanism.

SysML offers systems engineers several noteworthy improvements over UML, which tends to be software-centric. These improvements include the following:[1]

SysML reuses seven of UML 2's thirteen diagrams, and adds two diagrams (requirements and parametric diagrams) for a total of nine diagram types. SysML also supports allocation tables, a tabular format that can be dynamically derived from SysML allocation relationships. A table which compares SysML and UML 2 diagrams is available in the SysML FAQ.

The advantages of SysML over UML for systems engineering become obvious if you consider a concrete example, such as modeling an automotive system. With SysML you can use Requirement diagrams to efficiently capture functional, performance and interface requirements, whereas with UML you are subject to the limitations of Use Case diagrams to define high-level functional requirements. Likewise, with SysML you can use Parametric diagrams to precisely define performance and quantitative constraints such as maximum acceleration, minimum curb weight, and total air conditioning capacity. UML provides no straightforward mechanism to capture this sort of essential performance and quantitative information.

As for the rest of the automotive system, enhanced activity diagrams and state machine diagrams can be used to specify the embedded software control logic and information flows for the on-board automotive computers. Other SysML structural and behavioral diagrams can be used to model factories that build the automobiles, as well as the interfaces between the organizations that work in the factories.

The SysML initiative originated in a January 2001 decision by the International Council on Systems Engineering (INCOSE) Model Driven Systems Design workgroup to customize the UML for systems engineering applications. Following this decision, INCOSE and the Object Management Group (OMG), which maintains the UML specification, jointly chartered the OMG Systems Engineering Domain Special Interest Group (SE DSIG) in July 2001. The SE DSIG, with support from INCOSE and the ISO AP 233 workgroup, developed the requirements for the modeling language, which were subsequently issued by the OMG as part of the UML for Systems Engineering Request for Proposal (UML for SE RFP; OMG document ad/03-03-41) in March 2003.[2]

In 2003 Cris Kobryn and Sanford Friedenthal organized and co-chaired the SysML Partners, an informal association of industry leaders and tool vendors,[3] which initiated an open source specification project to develop the SysML in response to the UML for Systems Engineering RFP.[4] The SysML Partners distributed their first open source SysML specification drafts in 2004, and submitted SysML 1.0a to the OMG for technology adoption in November 2005.

After a series of competing SysML specification proposals, a SysML Merge Team was proposed to the OMG in April 2006.[5] This proposal was voted upon and adopted by the OMG in July 2006 as OMG SysML, to differentiate it from the original open source specification from which it was derived. Because OMG SysML is derived from open source SysML, it also includes an open source license for distribution and use.

There are several modeling tool vendors already offering SysML support, or are in the process of updating their tools to comply with the OMG SysML specification. Lists of tool vendors who support, or have announced support of, SysML or OMG SysML can be found on the SysML Forum or OMG SysML websites, respectively.

As an OMG UML 2.0 profile, SysML models are designed to be exchanged using the XML Metadata Interchange (XMI) standard. In addition, architectural alignment work is underway to support the ISO 10303 (also known as STEP, the Standard for the Exchange of Product model data) AP-233 standard for exchanging and sharing information between systems engineering software applications and tools.