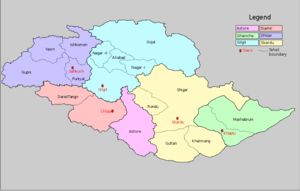 The district is administratively subdivided into the following s:

Only a part of the basin of the ,i.e. is included within the political boundaries of Gilgit District. There is an intervening width of mountainous country, represented chiefly by s and s, and intersected by narrow sterile valleys, measuring some convert|100|m|ft to convert|150|m|ft| in width, to the north and north-east, which separates the province of Gilgit from the Chinese frontier beyond the and . Towering above Gilgit is Mount Rakaposhi at convert|7788|m|ft|sigfig=5.

The main rivers in the District are:
* - flows south along the from the , known as in the south of
* - flows further south and falls into just in the northeast of town
* - enters Gilgit District from west in the south of () and flows west through the Gilgit town.
* - enters Gilgit District from about six kilometers north of where falls into and the Indus flows south along the Karakoram Highway.
**

There are many tributaries of the above main rivers, some of which are , , , and .