A Simple Twist of Fate

A Simple Twist of Fate

:"For the Bob Dylan song with a similar name, see ." 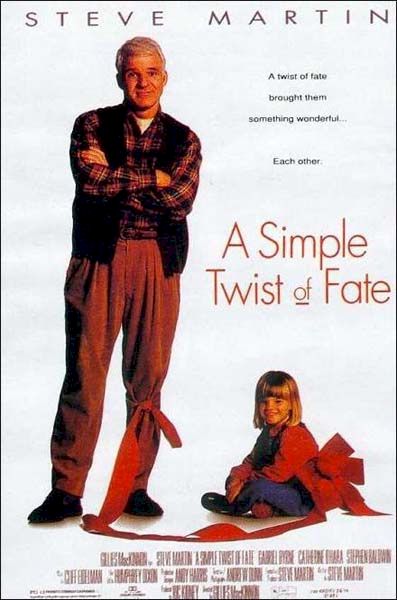 When high school music teacher Michael McCann discovers his wife is pregnant by another man, he divorces her and retreats into a life of solitude as a maker of finely crafted furniture in rural . Five years later, he's robbed of a valuable collection of gold coins by Tanny Newland, the ne'er-do-well brother of politician John Newland, who harbors a secret about his past.

Shortly after, in the middle of a winter storm, Michael is startled to discover a toddler has wandered into his home while he was outside gathering wood. A short distance from his house he discovers the body of her mother, a addict whose car had run out of gas nearby. Unbenownst to him, the child is the illegitimate daughter of John Newland, who participates in the investigation but keeps his relationship to the little girl a secret in order to protect his career.

Michael is permitted to adopt the child and christens her Mathilda. She proves to be a bit of a handful in her early years, but with the help of friend and local shopkeeper April Simon, Michael manages to raise her to be a bright, personable, precocious young lady, and the once dour, lonely man is transformed by her presence.

As John Newland watches his daughter grow older, he begins to invite her to join him and his wife Nancy in their home and arranges for her to learn to ride a horse, eventually giving her one of her own. Nancy has suffered two miscarriages and wants to adopt a child, but John resists and finally reveals Mathilda's true identity. Nancy encourages him to gain custody of the girl, and a trial ensues. The judge is inclined to side with the Newlands, given their wealth and ability to provide Mathilda with advantages she never would have with Michael. Then the remains of Tanny Newland - surrounded by the gold coins he had stolen from Michael - are found at the bottom of a quarry his brother was draining to create a lake surrounded by prime real estate he planned to sell for a tidy profit. Michael's sudden return to wealth turns the tide in his favor, and it is decided Mathilda will remain with him.

of the "" called the film "warm and funny" and thought "there is a lot to like about [it] ," but ultimately was disappointed with it on the whole. He observed, "Try as I might, I just couldn't accept this Victorian story in modern dress. The motivations seemed wrong (would 20th century people behave this way?), the plotting seemed contrived (as indeed it was), and the plot's habit of springing big surprises on us was too manipulative. This is not at all a bad movie, mind you, but a good movie gone wrong, through a simple twist of miscalculation." [ [http://rogerebert.suntimes.com/apps/pbcs.dll/article?AID=/19940902/REVIEWS/409020302/1023 "Chicago Sun-Times", September 2, 1994] ]

Hal Hinson of the "" said, "When clowns write sad stories for themselves, the results are almost always disastrous. For "A Simple Twist of Fate", Steve Martin not only wrote the screenplay ... but also executive-produced the project, creating for himself a character that is about as different from his typical roles as can be imagined. And if the exercise isn't precisely disastrous, it comes very close to it ... Perhaps it's a stretch for a performer with such remarkable charisma to play someone who is without it ... Martin does a skillful job of nullifying himself, and he does present a side of himself that has been glimpsed only briefly. But what a joyless accomplishment it is. As a comic, Martin soars, but here he has clipped his own wings." [ [http://www.washingtonpost.com/wp-srv/style/longterm/movies/videos/asimpletwistoffatepg13hinson_a0a848.htm "Washington Post", September 2, 1994] ]

According to "Variety", "The pairing of Steve Martin and 19th-century novelist George Eliot seems about as likely an artistic union as adapting . Yet "A Simple Twist of Fate" - inspired by "Silas Marner" - betrays no tell-tale strains of clashing sensibilities. Martin leavens the material somewhat, but this is a faithful, heartfelt, somber piece about family and responsibility." [ [http://www.variety.com/review/VE1117794903.html?categoryid=31&cs=1&p=0 "Variety" review] ]

The film opened on 319 screens on weekend and earned $1,404,904 over a four-day period, ranking #19 among all releases. It eventually grossed $3,430,583 at the domestic box office [ [http://www.boxofficemojo.com/movies/?id=simpletwistoffate.htm BoxOfficeMojo.com] ] .