To Kill a Mockingbird (film)

To Kill a Mockingbird (film) 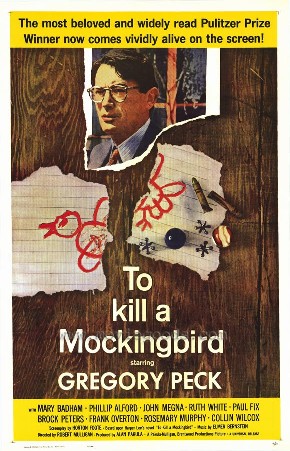 "To Kill a Mockingbird" is a fy|1962 directed by and based on the novel of the same name by . The film stars in the role of Atticus Finch. In 2007, it was ranked twenty-fifth on the 's 10th anniversary list of the greatest American movies of all time. Today, the film is in the in the United States because of missing copyright indication.

Through the eyes of "Scout (), a feisty six-year-old tomboy, the story carries us on an odyssey through the fires of prejudice and injustice in . Presenting her tale first as a sweetly lulling reminiscence of events from her childhood, the narrator draws us near with stories of daring neighborhood exploits by Scout, her brother "Jem" (), and their friend "Dill" (). Peopled with a cast of eccentrics, Maycomb finds itself the venue of the trial of Tom Robinson (), a young black man falsely accused of raping an ignorant white woman. (), Scout and Jem's widower father and a deeply principled man, is appointed to defend Tom for whom a guilty verdict from an all-white jury is a foregone conclusion. Juxtaposed against the story of the trial is the children's hit and run relationship with Boo Radley (), a shut-in whom the children and Dill's Aunt Rachel suspect of insanity and whom no one has seen in recent history. Cigar-box treasures, found in the knot hole of a tree near the ramshackle Radley house, temper the children's judgment of Boo. "You never know someone," Atticus tells Scout, "until you step inside their skin and walk around a little." But fear keeps them at a distance until one night, in streetlight and shadows, the children confront an evil born of ignorance and blind hatred and must somehow find their way home.

The character of Atticus in this movie has been deemed the #1 greatest hero of American film, as rated by the . [ [http://www.afi.com/tvevents/100years/handv.aspx AFI's 100 Years List] ] It is also 's big-screen debut, as the misunderstood recluse Boo Radley. The movie was nominated for eight , winning three. In 1995, "To Kill a Mockingbird" was selected for preservation in the United States by the as being "culturally, historically, or aesthetically significant".

, who played the role of Jem, did not initially want to audition for the part. However, when his mother informed him that he would miss a half day of school, he quickly changed his mind. Additionally, he became upset during the filming of the scene at the breakfast table, when , who played Scout, had trouble performing the scene properly. By way of retaliating, during the scene where Jem rolls Scout in a tire, he intentionally rolled the tire toward an equipment truck. [ [http://imdb.com/title/tt0056592/trivia "To Kill a Mockingbird" Movie Page] ]

According to Kim Hamilton, who played the part of Helen Robinson in the movie, Gregory Peck was the consummate gentleman. She recalled a scene where her character collapses after hearing the news of her husband's death, and Peck, as Atticus, picks her up and carries her into the house. "He was such a gentleman," she says. "I never forgot that."

Gregory Peck's performance became synonymous with the role and character of Atticus Finch. Alan J. Pakula remembered hearing from Peck when he was first approached with the role: "He called back immediately. No maybes. The fit was among the most natural things about a most natural film. I must say the man and the character he played were not unalike."

Upon Peck's death in 2003, , who played Tom Robinson in the film version, quoted Harper Lee at Peck's eulogy, saying, "Atticus Finch gave him an opportunity to play himself". Peters concluded his eulogy stating, "To my friend Gregory Peck, to my friend Atticus Finch, vaya con Dios." [Hoffman, Allison, Rubin, H. "Peck Memorial Honors Beloved Actor and Man; The longtime star is remembered for his integrity and constancy." "Los Angeles Times": , . pg. B.1.] Peters remembered the role of Tom Robinson when he recalled, "It certainly is one of my proudest achievements in life, one of the happiest participations in film or theater I have experienced." [Oliver, Myrna. "Obituaries; Brock Peters, 78; Stage, Screen, TV Actor Noted for Role in 'To Kill a Mockingbird'; " "Los Angeles Times". Los Angeles, Calif.: , . pg. B.8.] Peters remained friends not only with Peck but with Mary Badham throughout his life.

The named Atticus Finch the greatest movie hero of the 20th century. Additionally, the AFI ranked the movie second on their 100 Cheers list, behind "", and twenty-fifth on the list of greatest American films of all time. [ [http://imdb.com/title/tt0056592/trivia "To Kill a Mockingbird" Movie Page] ] In June 2008, the AFI revealed its "Ten top Ten"—the best ten films in ten "classic" American film genres—after polling over 1,500 people from the creative community. "To Kill a Mockingbird" was acknowledged as the best film in the courtroom drama genre. [cite news | publisher = | title = AFI's 10 Top 10 | date = | url = http://www.afi.com/10top10/crdrama.html | accessdate=2008-06-18]

In 2007, Hamilton was honored by the community for her part in the movie. She is the last surviving African-American adult who had a speaking part in the movie. When told of the award, she said, "I think it is terrific. I'm very pleased and very surprised."

* It was entered into the in 1995 by the , deemed as 'culturally, aesthetically and historically' significant