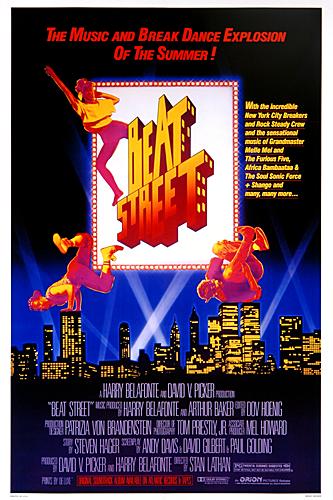 "Beat Street" is a 1984 mainstream hip hop dramatic feature film, and the second following "". It is set in during the popularity rise of in the early 1980s.

The movie was the East Coast answer to the Los Angeles-set "Breakin'," displaying , ing, and with a mild social undertone. Some of the plotline was based on the graffiti documentary "". Most visibly, the villain character "Spit" in "Beat Street" was lifted from the way the real-life graffiti artist "Cap" was portrayed in "Style Wars".

Notable performances include a song by , breakdance battles between the and the , and cameos by beatboxer , , and the .

Many of the internal dance sequences were filmed at the popular New York City nightclub the Roxy located at "515 West 18th Street" in the Chelsea section of .

Most of the graffiti art that was displayed all throughout the film was not done by real graffiti artists - it was airbrushed by set decorators.

is credited as "High School Student" in the film. However, his scenes are all cut from the final theatrical version.

Singer has a small cameo in the film as a young singer auditioning at an open call audition.

Contrary to popular (internet legend) belief, of the was not actually in the movie. Some rumors have floated around the net stating that he is the guy in the black hat rapping during the Roxy auditions scene. However, RZA has gone on the record stating he was NOT in the film. In fact, RZA would have only been 15 at the time Beat Street was filmed, and clearly the gentleman in the black hat is much older than 15.

The two young break dancers auditioning during the Roxy try outs were known as The Fantastic Duo. The younger, shorter one is known as Young God (Robert Steele). The older kid is known as Loose Joints (Jamel Brown).

The final performer at the audition, whom most believed was not an actual performer, was known as Andy B Bad. The song he performed was actually released on vinyl.

This was the first American film to feature more than one soundtrack album. Originally, , which released the soundtrack albums, had three volumes planned, but only two of these were released. The second volume was never released on compact disc.

The trailer includes an alternate version of the title song performed by , a version which also was not featured in the movie or on the original soundtrack albums.

* The film is mentioned in episode 12 of "" while Robert "Granddad" Freeman discusses Riley's graffiti masterpiece.
* in his song "Suicidal Thoughts" said, "Should I die on the train tracks like Ramo in Beat Street/ people at my funeral frontin' like they miss me."
* in his song "Won't Catch Me Runnin'" said, "When my voice hits the mic, I electrocute Spit like Beat Street".
* Portions of the Beat Street Breakdown scene can be downloaded from video sharing sites YouTube and MySpace.