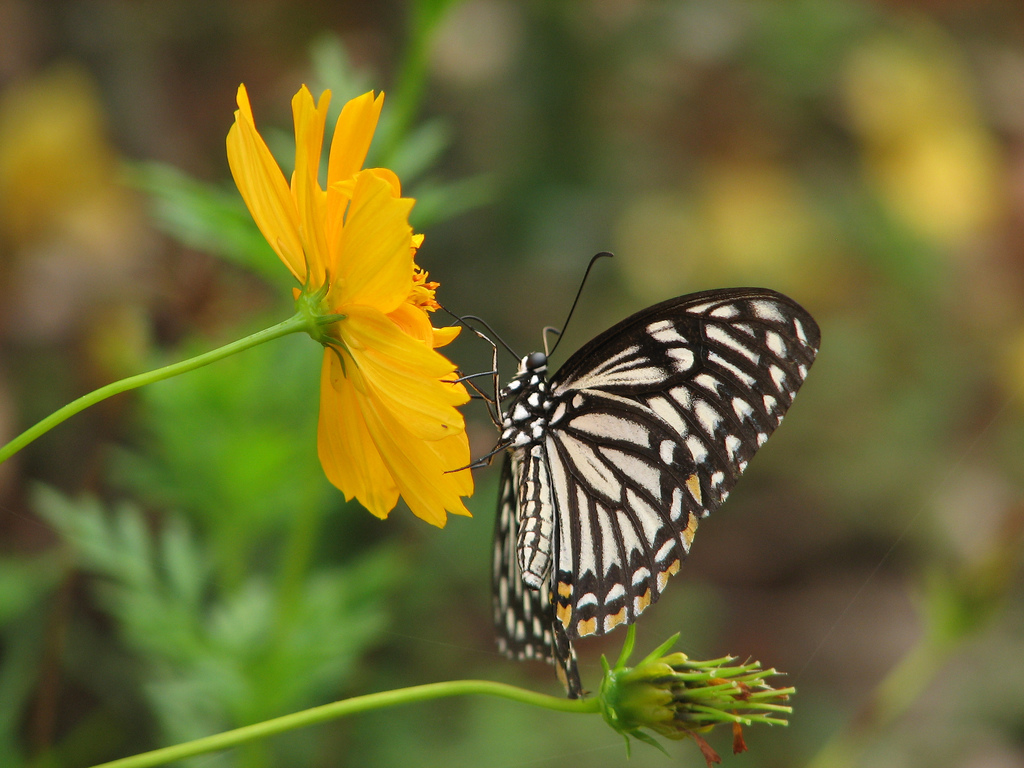 The Common Mime ("Papilio (Chilasa) clytia") is a butterfly found in South and South-east Asia. The butterfly belongs to the "" group or the "Black-bodied s". It serves an excellent example of a Batesian among the Indian butterflies.

:"For terminology used in the description see "

Both males and females have the upperside velvety black or soft dark brown. Forewing: a subterminal series of outwardly truncate or emarginate white spot; the spot in interspace 4 shifted inwards out of line; those in interspaces 6,7 and 8 oblique to the costa, the lowest and the upper two spots elongate; this is followed by a terminal series of smaller white spots, two in interspace 1, one above the outer, and two in interspaces 8; lastly, a single spot between the subterminal and terminal series. Hindwing: a discal series of inwardly conical and outwardly emarginate, triangular, elongate white spots; a prominent tornal yellow spot broadly divided across the middle by a bar of the ground colour. The cilia touched with white in the interspaces; sometimes one or more of these specks on the cilia are broad and prominent and yellow in colour. Underside: from soft pale brown to rich dark velvety brown. Forewing with the markings as on the upperside. Hindwing: the markings also similar to those on the upperside, but the terminal margin beyond the subterminal series of white markings bears a row of comparatively large very conspicuous yellow spots, separated from the white lunules by a series of short transverse detached spots of the ground colour. Antennae, head, thorax and abdomen black, the thorax anteriorly and beneath and the abdomen on the sides spotted with white.

Form "dissimilis", Doubleday differs from the first form as follows: Upperside, forewing: cell with four streaks coalescent at base and four spots beyond at apex, a long streak in interspace 1a, two streaks with two spots beyond which are more or less coalescent with them in interspace 1, a broad streak with an outwardly emarginate spot in interspace 2, similar spots, one at base and one beyond, in 3, a single similar spot in 4, elongate streaks in 5 and 6, and much smaller elongate spots in interspaces 8 and 9. All these streaks and spots cream-white with diffuse edges; subterminal and terminal markings as in the first form. Hindwing: markings similar to those in the first form with the following differences: discoidal cell entirely white, discal white streaks longer that reach quite up to the outer margin of the cell and are continued anteriorly to the costa by elongate streaks in interspaces 6 and 7, two spots in interspace 8 and a slender streak along the costa; the subterminal and terminal markings as in the first form. Underside similar to the upperside, the cream-white markings slightly larger, the terminal series of yellow spots on the hindwing as in the first form. Antennae, head, thorax and abdomen as in the typical "clytia" form; the head, thorax and abdomen with more prominent white spots.

Many variations have been described and given names in the past, and many of these names may no longer be valid.

* Variety "casyapa", Moore - "Forewings, besides the marginal and submarginal markings with a third discal series of one to five markings." (Rothschild quoted in Bingham)

* Variety "papone", Westwood - "Forewings black, with an obvious bluish tint in certain lights; the white spots absent from the forewings or only faintly indicated." (Rothschild quoted in Bingham)

* Variety "commixtus", Rothschild- "Forewings black or bluish black, with a marginal, submarginal and a subdiscal series of most feebly-marked spots, and with two faint spots behind the cell and a streak along the inner margin (dorsum) white; the discal markings are often indicated by a few white scales, or are entirely absent. Hindwings with apical half of the cells, seven long discal streaks reaching the base of the respective cellules (interspaces?) ( the first and the last reach the base of the wing) and a marginal and submarginal series of spots white as in ab. "dissimils", L. This aberration and examples intermediate between it and "clytia" I received from the Khasia Hills." (Rothschild quoted in Bingham)

* Race "lankeswara" (Sri Lanka) Moore- "Differs from "P. clytia" in the umber-brown colour of the wings and in the small submarginal spots of the fore wings; from "P. clytia panope", it is distinguished chiefly by the longer discal sagittiform spots of the hindwings. This subspecies has been described from slightly aberrant specimens in which the submarginal spots of the forewings are partly obliterated; in most individuals the series of these spots is complete, and on such specimens Moore's "clytioides" is based." (Rothschild quoted in Bingham) The dimorph or "dissimilis" form of this race is identical with that of "P. clytia".

* Race "panope", Linn. (Myanmar and into Siam and the Malay Peninsula) - "The discal sagittate spots of the hindwings are shorter than in "P. clytia", sometimes they have almost disappeared from the upperside. Most frequently the marginal and submarginal markings of the forewings are more or less merged together, and form in the apex of the wing three large patches." (Rothschild quoted in Bingham) The dimorph or "dissimilis" form of this race also resembles that of the typical form.

* Race "flavolimbatus", Oberthür (The Andamans) - Closely resembles the "dissimils" form of "clytia"; differs as follows: both males and females distinctly larger, the white markings similar but proportionately larger, with the exception of the streaks in the discoidal cells of both fore and hindwings, which are narrower and less firmly defined; on the hindwing there is a terminal row of ochraceous-yellow spots on the upper as well as on the underside, while those on the underside are very much larger than in "P. clytia", dimorph "dissimilis". The dark form "clytia" or any race of it is apparently unknown in the Andamans.

This is a butterfly of hilly regions but also found at lower elevations. It is plentiful in the premonsoon and monsoon period and becomes scarce later on.

The flight of the Mime also resembles that of the model, fluttering, neither weak nor strong, sometimes staying close to the ground and at other times flying strongly up into the treetops. It mud-puddles on stream banks in summer. Known to bask and usually sits with the wings spread wide open while feeding on nectar from flowers.

Spherical, shiny and orange-yellow, laid on upper surface of leaves.

The larvae and pupa are stated by Mackinnon to resemble closely the larva and pupa of "P. agestor'. Messrs. Davidson and Aitken's description of them is as follows:"Not unlike the larva of the "Ornithoptera" group in form, having similar rows of fleshy processes, but it is by far the handsomest "Papilio" larva we know, being of a dark umber-brown colour with a bright red spot at the base of each process, a dorsal row of large irregular yellow patches and a partial lateral row ending in a diagonal band which connects the two."

velvet black or dark green. Has carmine spots. Has a dark red-brown longitudinal band and red spots. Two rows of sharp spines on segments 1 to 4 and single row on the others. The is light indigo-blue.

"is unique, exhibiting one of the most remarkable instances of protective resemblance we know. It exactly resembles a dead twig about an inch long and less than a quarter of an inch in diameter, broken of irregularly at one end. The last segment is so modified that the pupa is not attached by one point, but appears as if it had grown out of the branch to which it affixes itself."

An inch in length, brownish with streaks and blotches. Rough surface with tubercles. Has uncanny resemblance to a broken twig and is suspended at an appropriate angle.