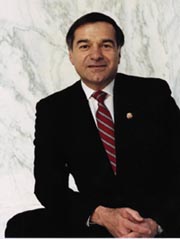 Joseph J. DioGuardi (born , ) is an American and of Albanian () and Italian descent from . He previously served in the House of Representatives representing the 20th congressional district of New York from 1985 to 1989. [DioGuardi, Joseph J. “Ending the Credit Card Mentality in Congress: A Guide to Achieving Fiscal Discipline.” In A House of Ill Repute, edited by Dan Renberg, 26-32. Princeton, N.J.: Princeton University Press, 1987.] Hon.DioGuardi is the president of the . [http://blog.aacl.com/albanian-american-civic-league-board-of-directors/]

He is a member of the Republican party, and has frequently launched unsuccessful attempts to regain a seat in Congress. As recently as June 2007, his name was mentioned as a possible candidate for congress in the 19th district of New York seeking to face freshman incumbent John Hall in the 2008 general election.

Joseph J. DioGuardi moved to with his immigrant parents, brother, and sister in 1957. He is a 1958 graduate of , and in 1962 he graduated with honors from . His parents immigrated to the United States from southern Italy, and were of Albanian origin. DioGuardi served for twenty-two years, twelve of them as a tax partner, with the international accounting firm of & Co. He is the author of "Unaccountable Congress: It Doesn't Add Up".

DioGuardi's wife, Shirley Cloyes DioGuardi, is the Balkan Affairs Advisor to (and co-founder of) the . The DioGuardis reside in . They have a daughter, , a songwriter, record producer, and singer, recently named as the fourth judge added to 's 2008-2009 season [ [http://www.mtv.com/news/articles/1593552/20080826/abdul_paula.jhtml# MTV News, Aug 26 2008, "Paula Abdul Changes Her Tune, Says 'It's About Time Another Girl Joined' Her On 'American Idol': Abdul said Monday she was 'concerned' about new judge Kara DioGuardi", By Jocelyn Vena] ] .

In November 1984, he was elected Congress, when he became the first practicing certified public accountant ever elected to the . He was re-elected in 1986, and served in Congress in 1985-89.

In Congress, DioGuardi authored the Chief Financial Officer's Act which mandated the assignment of a CFO to each major department and agency of the U.S. government. A later version was passed by Congress and into law signed by in 1990, two years after DioGuardi left office. In 1986, with the late Democratic Congressman , DioGuardi initiated legislation to confer the on Black and military heroes. DioGuardi was defeated for re-election in 1988 by liberal activist .

In the years that followed, DioGuardi made a series of failed campaigns to return to Congress. DioGuardi won the Republican primary in 1992 but then lost in the general election. He performed even worse in later races, losing Republican primaries for Congress in 1994 and 1996. After losing the 1994 GOP primary, DioGuardi continued his campaign for the seat as the nominee of the Conservative Party and the Right-to-Life Party. In 1996, DioGuardi also lost the Conservative Party primary for Congress. He was the unsuccessful Right-to-Life Party nominee for Congress in 1996 and 1998. He briefly flirted with running again in 2000, but decided against entering the race.

Since leaving Congress in 1989, DioGuardi has established a nonpartisan foundation called Truth In Government, which advocates federal fiscal reforms.

DioGuardi is an advocate for the Kosovan Albanians. After leaving Congress in 1989, he has made fifteen trips to the region. As president of the , he and Congressman made the first official trip to in fifty years, and he helped open the doors to democracy in this former dictatorship. In August 1990, DioGuardi persuaded and six other U.S. Senators to visit the two million Albanians in . In September 1996, he returned to Albania with Congressman , chairman of the Committee on International Relations, to meet with President to discuss Albanian national security and minority rights for the ethnic Greeks in southern Albania. In June 1997, DioGuardi led a delegation to monitor the national elections in Albania and in August 1998 he traveled to northern Albania to assess the humanitarian crisis emanating from the war in Kosovo, at the request of Congressman . In March 2007, he traveled with his wife, Shirley Cloyes DioGuardi, to in support of as his war crimes trial began at the .

DioGuardi is the recipient of numerous awards and honors, including investiture as a in 1979, the International Humanitarian Award in 1986, the Outstanding CPA in Government Award from the New York State Society of CPAs in 1986, the Torch of Liberty Award from the in 1987, the Outstanding Public Service Award from the Westchester County Republican Committee in 1987, the Westchester Irish Committee's Dedication to Peace and Justice Award in 1988, the Paul Harris Fellow Award of the of in 1988, and the Annual Achievement Award of the Association of Government Accountants (Boston Chapter) in 1992.

In December 2006, DioGuardi expressed an interest in running for Congress in 2008 against the newly-elected Democratic Congressman John Hall ( [http://clerk.house.gov/members/electionInfo/elections.html Office of the Clerk, US House] ). Westchester County Legislator and Iraq Veteran and Peekskill resident have also declared their intention to challenge Hall in 2008. On , , Republican delegates from each of the five counties represented in the 19th district met in to endorse a candidate, and chose Lalor, with 347 votes going to the Iraq veteran, 311 going to Oros, and 102 going to DioGuardi.