Marine Attack Squadron 542 was initially commissioned as Marine Night Fighter Squadron 542 (VMF(N)-542) on March 6, 1944, at Marine Corps Air Station Cherry Point, North Carolina. Upon commissioning, the squadron was assigned the F6F Hellcat. They were relocated to San Diego, California in mid-summer, 1944 in preparation for a move to the combat zone. Late in October, the squadron arrived at Ulithi, in the Caroline Islands and immediately began flying combat air patrols. 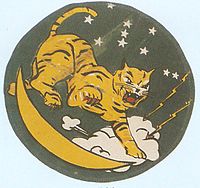 Squadron logo during WWII when they were VMF(N)-542

Later in 1944, VMF(N)-542 deployed to the Pacific theater. By early April 1945, most of the squadron had deployed to take part in the Battle of Okinawa. Night operations against the enemy began on April 15 with missions being flown from Yontan Airfield, Okinawa. Second Lieutenant Arcenaux was the first squadron pilot to down an enemy warplane with a night fighter on April 16, 1945. While stationed at Yontan, the Tigers were credited with destroying eighteen Japanese airplanes and carrying out rocket attacks on the Ryukyu Islands chain of Amami, Amami Ōshima, Tokunoshima, Kikai Shima, Miyako Jima, and Amami Gunto. For these actions the Tigers were awarded the Presidential Unit Citation. Between April and August 1945, Major Robert B. Porter and Captain Wallace E. Sigler became the first night fighter aces on Okinawa.

Following a short tour of occupation duty at Yokosuka, Japan, VMF(N)-542 was transferred to Marine Corps Air Station El Toro, California. Training during this period was oriented towards night and all-weather fighter tactics and resulted in the squadron being re-designated Marine Night Ail-Weather Fighter Squadron 542 (VMF(AW)-542) in 1948. 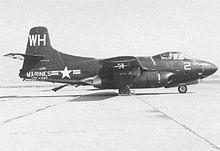 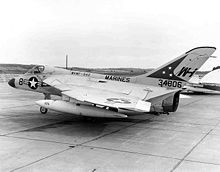 After receiving the new twin-engine, radar-upgraded F7F Tigercat, VMF(AW)-542 was ordered to Kimpo Airfield, South Korea in September 1950. From Kimpo, missions including close air support, air interdiction, and reconnaissance flights were conducted against the enemy in Korea.

Returning to El Toro, CA in March 1951, VMF(AW)-542 transitioned into the jet age by acquiring the F3D Skyknight. The "Skynight" was the first carrier-borne jet night fighter. The Tigers used the F3D-2 to train pilots and Radar Intercept Officers for duty in Korea. During the Korean War, more enemy aircraft were destroyed by F3D's than by all other Navy types. The squadron remained at MCAS El Toro, and in June 1958 accepted the F4D Skyray (affectionately known as the "Ford"). 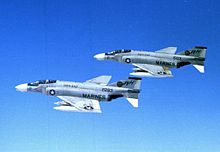 As a result of the build up of American involvement in the Vietnam War, VMFA-542 was ordered to Japan in April 1965, followed by redeployment to the Republic of Vietnam a few weeks later. The squadron initially entered the country at Da Nang on July 10, 1965 and commenced air operations against the enemy shortly thereafter. Its primary mission at this time was to provide air support to Marine ground forces.

In August 1965, VMFA-542 supported the 7th Marine Regiment in Operation Starlite -- the first major American operation of the war.[1] The squadron's first tour in South Vietnam ended in early December 1965 when it redeployed to Marine Corps Air Station Iwakuni, Japan. VMA-542 spent three more tours in Southeast Asia. The Tigers returned to South Vietnam late in the winter of 1966 and remained until mid-summer the following year when they again moved to Japan. Beginning that fall, the Tigers began a thirteen-month deployment in the war zone. The Tigers' last combat tour in Southeast Asia started on May 10, 1968.

While serving in Vietnam, the Tigers furnished air support to ground forces in some of the largest land operations of the war. Included in these operations were: Utah, Texas, Prairie, Union, Kingfisher, Fremont, Allen Brook, Napolean-Saline, Lancaster, Scotland, Nevada Eagle, and Idaho Canyon. Close air support missions were not only flown on behalf of Marine ground personnel but also for American Army units and at times for South Vietnamese forces and for elements of the South Korean Marine Corps. In addition, the Tigers flew bombing missions in both Laos and North Vietnam. After the November 1968 bombing halt of North Vietnam, the Tigers flew escort for reconnaissance missions over that area. Strikes against enemy targets in Laos on the other hand were increased after the bombing halt. Enemy supply lines in Laos were hit especially hard throughout 1969. VMFA-542 dropped over 20,000 tons of ordnance in Southeast Asia from May 1968 to January 1970. The last mission flown by the squadron was a night interdiction flight over Laos on January 13, 1970. The rest of the month was spent preparing to leave South Vietnam. On January 30, the first echelon took off from Da Nang; the second echelon left the next day. Included in this flight to the United States were thirty-five tactical jet aircraft. Code name for this major relocation of Marine F-4's was Key Wallop II.

After the Tiger's return to California, VMFA-542 was placed in a cadre status. In April, the strength of the unit was down to one officer. Deactivation eventually came on June 30, 1970. The squadron's deactivation was of a short duration as it was reinstated as an active organization a year and a half later. Rebirth occurred at Marine Corps Air Station Beaufort, South Carolina on January 12, 1972. The squadron at this time received the designation of Marine Attack Squadron (VMA) 542. Upon reactivation, the Tigers were assigned the new AV-8A Harrier. The Tigers thus became the second Marine squadron to be so equipped.

The Tigers were relocated to MCAS Cherry Point, North Carolina in August 1974. During the period of July 1, 1977 through June 30, 1979, VMA-542 was selected as the "Marine V/STOL Squadron of the Year" for two consecutive years.

April 1986 saw the end of the AV-8A and C models for VMA-542 as the Tigers transitioned to the AV-8B - the Marine Corps' new light attack "Harrier". Even more capable in V/STOL operations, the AV-8B extends the range and payload and incorporates state of the art technology for navigation and weapon delivery. The full transition was complete by May 1986. December 1989 saw the full squadron deployed for six months to Iwakuni, Japan, in support of the Unit Deployment Program (UDP). They returned to Cherry Point in May 1990.

In August 1990, the Tigers deployed to the Bahrain in support of Operation Desert Shield. After three months at that location, the squadron deployed to King Abdul Aziz Naval Base, Jubail, Saudi Arabia as part of the most forward deployed fixed wing group in theater.

Within twelve hours of arrival in Bahrain, Tiger pilots were standing 24-hour combat alerts. The alert status lasted until five hours after the commencement of Operation Desert Storm on January 17, 1991 when the first division of VMA-542 Harriers launched to suppress Iraqi artillery positions in Southern Kuwait. From that day forward. Tiger "Harriers" flew a sustained combat sortie rate until the end of hostilities on February 27, 1991.

On February 22, two days prior to the initiation of the ground offensive, the Tigers of VMA-542 surged to a schedule of 58 sorties per day as the final battlefield preparation was initiated. These final prep fires included Mk77 Napalm delivered on trench lines in the area where the Marine Expeditionary Force breaching operation would occur. In addition, the Tigers continued targeting of enemy artillery and armor, which could be brought to bear against the Allies during their breaching operations.

Throughout these forty-two days of conflict the Tigers of VMA-542 flew more than 1000 combat sorties amassing over 1200 flight hours while delivering over one thousand tons of ordnance on the enemy. When the war commenced, VMA-542 responded by delivering more ordnance, flying more sorties, and accruing more combat hours than any other V/STOL squadron in theater.

The Tigers returned to MCAS Cherry Point in April 1991. Shortly thereafter the squadron was selected to introduce the new Radar/Night Attack AV-8B Harrier II Plus to the fleet in 1993.

On August 8, 1997 the squadron deployed 12 aircraft to Marine Corps Air Station Yuma. The deployment training got off to a strong start but was daunted by the loss of one of the jets piloted by Capt Samuel H. Smith. After several days of flight suspension, the word came that time consuming inspections would have to be conducted on the aircraft before they could be flown again. These inspections revealed internal engine damage in four of twelve of the aircraft, requiring complete engine replacement.

September marked a recovery period as the squadron deployed two jets and approximately 25 Marines back to Yuma Arizona to support the fall Weapons and Tactics Instructor (WTI) course.

The squadron's detachment aboard USS Kearsarge (LHD-3) returned to Cherry Point on October 12, 1997, after being deployed for nearly six months. A Capabilities Exercise (CAPEX) was conducted on October 7–10, and just as the operational tempo hit top gear, the squadron experienced yet another setback on October 16, when one of the jets was lost in Dayton, Ohio.

May 1999 marked the return of the 24th Marine Expeditionary Unit boat detachment from combat operations in Kosovo. Their support of NATO operations was the first in armed conflict since Desert Storm. They successfully flew 38 combat sorties deployed aboard the USS Nassau (LHA-4).

The squadron deployed to Al Asad Airbase in Al Anbar Province in support of Operation Iraqi Freedom during 2007-8.[2]