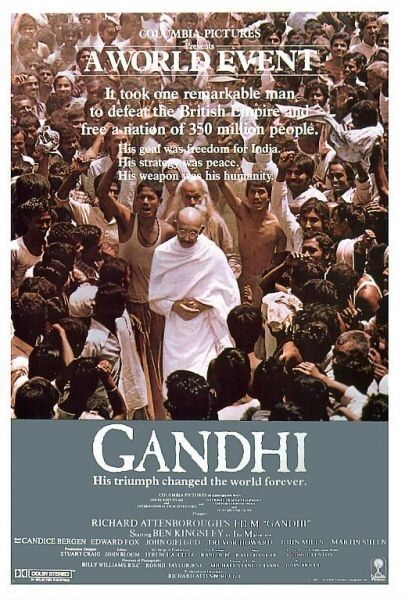 "Gandhi" (1982) is a about Mohandas ("Mahatma") Gandhi, who was a leader of the movement against British colonial rule in during the first half of the 20th century. The film was directed by and stars as Gandhi; both won s for their work on the film. The film was also given the Academy Award for Best Picture.

It was an between production companies in and the UK. The film premiered in on , .

The film opens with a statement from the filmmakers explaining their approach to the problem of filming Gandhi's complex life story:

The film begins with Gandhi's assassination and funeral on , . After an evening prayer, an elderly Gandhi is helped out for his evening walk to meet a large number of greeters and admirers. One of these visitors shoots him point blank in the chest. Gandhi exclaims, "Oh, God!" ("Hé Ram!" historically), and then falls dead. The film then cuts to a huge procession at his massive funeral, which is attended by dignitaries from around the world.

The early life of Gandhi is neither seen nor mentioned. Instead, the story flashes back to a life-changing event: in 1893, Gandhi is thrown off a South African train for being an Indian and traveling in a first class compartment. Gandhi realizes that the laws are biased against Indians and decides to start a non-violent protest campaign for the rights of all Indians in South Africa. After numerous arrests and the unwanted attention of the world, the government finally relents by recognizing rights for Indians, though not for the native blacks of South Africa.

After this victory, Gandhi is invited back to India, where he is now considered something of a national hero. He is urged to take up the fight for India's independence from the . Gandhi agrees, and mounts a non-violent non-cooperation campaign of unprecedented scale, coordinating millions of Indians nationwide. There are some setbacks, such as violence against the protesters and Gandhi's occasional imprisonment.

Nevertheless, the campaign generates great attention, and Britain faces intense public pressure. Too weak from to continue enforcing its will in India, Britain finally grants India's independence. Indians celebrate this victory, but their troubles are far from over. Religious tensions between and erupt into nation-wide violence. Gandhi declares a hunger strike, saying he will not eat until the fighting stops.

The fighting does stop eventually, but the country is divided. It is decided that the northwest area of India, and eastern part of India (current day ), both places where Muslims are in the majority, will become a new country called (West and East Pakistan respectively). It is hoped that by encouraging the Muslims to live in a separate country, violence will abate. Gandhi is opposed to the idea, and is even willing to allow to become the first prime minister of India, but the is carried out nevertheless.

Gandhi spends his last days trying to bring about peace between both nations. He thereby angers many dissidents on both sides, one of whom finally gets close enough to assassinate him in a scene at the end of the film that mirrors the opening.

Shooting began on , and ended on , . Approximately 300,000 extras were used in the funeral scene, the most for any film according to . [cite web
url=http://www.guinnessworldrecords.com/content_pages/record.asp?recordid=50642
title=Arts and media/Movies/Film extras
accessdate=2007-10-27
work=Guinness World Records
archiveurl=http://web.archive.org/web/20051126142323/http://www.guinnessworldrecords.com/content_pages/record.asp?recordid=50642
archivedate=2005-11-26]

During pre-production, there was much speculation as to who would play the role of Gandhi. The choice was who is partly of Indian heritage (his birth name is Krishna Bhanji). Casting director for the film was , an Indian theatre actress who later went on to be casting director in several British Indian films.
* as Mahatma Gandhi
* as
*Edward Fox as
* as Baron Irwin
* as Judge Broomfield
* as Lord Chelmsford
* as Vince Walker
* as
* as
* as Dr. Herman Kallenbach
* as
* as (Madeleine Slade)
* as
* as Khan
* as
* as
* as Senior Officer Fields
* as Collins
* as Kinnoch
* as Sir George Hodge
* as
* as Nahari
* as Colin, a young man who harasses Gandhi and Andrews

This film had been Richard Attenborough's dream project, although two previous attempts at filming had been attempted and failed. In 1952, secured an agreement with the Prime Minister of India (Pandit Nehru) to produce a film of Gandhi's life. However, Pascal died in 1954 before preparations were completed.Fact|date=February 2007 Later and planned to make a film about Gandhi after completing "" (1957), reportedly with as Gandhi. Ultimately, the project was abandoned in favour of "Lawrence of Arabia" (1962).Fact|date=February 2007

Historian Lawrence James has written of the film:

"The film ... is pure hagiography, the late-twentieth-century equivalent of a mediaeval encomium of a remarkable saint rendered in words and illuminated pictures." [cite book |last= James |first=Lawrence |title= Raj: The Making and Unmaking of British India |origyear=1997 |publisher=Little, Brown, and Company |isbn=031219322x |pages=465 ]

*imdb title|id=0083987|title=Gandhi
* [http://www.articlemyriad.com/108.htm Summary, analysis, and review of "Gandhi"]
* [http://www.americanrhetoric.com/moviespeeches.htm 4 Speeches from Movie in Text, Audio, Video] from AmericanRhetoric.com
* [http://www.movie-list.com/trailers.php?id=gandhi Trailer of the movie]
* [http://sfy.ru/sfy.html?script=gandhi Movie script]
* [http://www.bafta.org/library/gallery-gandhi-25-years-on,13,GAL.html Gallery of photos from the set of "Gandhi"] on the website