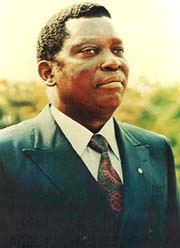 General Gnassingbé Eyadéma, formerly Étienne Eyadéma (, – ), was the President of from 1967 until his death. He participated in two successful military coups, in January 1963 and January 1967, and became President on , . He managed to remain in power for the next 38 years. According to BBC News, Eyadéma was, at the time of his death, "one of the last of a generation of African leaders" and "Africa's longest-serving ruler".

Eyadéma was born on in the village of Pya to a peasant family in the Kabye tribe. In 1953, Eyadema joined the French army where he learned to handle guns and the art of war. Eyadema participated in the wars of and . After almost 10 years in the French army, Eyadema returned to Togo in 1962. In 1963, he conducted a military coup against President Sylvanus Olympio, who died during the attack. Eyadema had for many years claimed to have fired the shot that killed Olympio as he scrambled over the French embassy walls. Thus many believe today that the confession by Eyadema of the execution was simply a way to build a personality cult , rather the execution of Olympio was done by French agents. He helped establish as the new President of Togo. In 1967, Colonel Eyadema of the Togolese Army led a second military coup against Grunitzky. Eyadema installed himself as president on 14 April 1967 as well as Minister of National Defense, an office that he assumed for 38 years.

Eyadéma had an extensive personality cult, including, but not limited to, an entourage of 1,000 dancing women who sang and danced in praise of him; portraits which adorned most stores; a bronze statue in the capital city, ; $20 wristwatches with his portrait, which disappeared and re-appeared every fifteen seconds; and even a comic book that depicted him as a with powers of invulnerability and super strength. [David Lamb, "The Africans", page 48] In addition, the date of a failed attempt on President Eyadéma's life was annually commemorated as "the Feast of Victory Over Forces of Evil." [Dr. F. Jeffress Ramsay, "Global Studies Africa: Seventh Edition," page 63]

Eyadéma subsequently won uncontested elections in 1972, 1979, and 1986. During his rule he escaped several assassination attempts; in 1974 he was the only person surviving a plane crash in the northern part of the country near Sarakawa. After another unsuccessful assassination attempt by a bodyguard, he carried the bullet removed by the surgeon as an . A national conference was held in August 1991, electing as Prime Minister and leaving Eyadéma as merely a ceremonial president. Although Eyadéma attempted to suspend the conference, surrounding the venue with soldiers, he subsequently accepted the outcome. [ [http://query.nytimes.com/gst/fullpage.html?res=9D0CE4DC163EF93AA1575BC0A967958260 "Togo's President Agrees to Yield Power to a Rival"] , "The New York Times", August 29, 1991.] Despite this, Eyadéma managed to remain in power with the backing of the army. In March 1993, an unsuccessful attack was made on the Tokoin military camp, where Eyadéma was living; several people were killed in the attack, including Eyadéma's personal chief of staff, General Mawulikplimi Ameji. ["Mar 1993 - Attack on presidential residence", Keesing's Record of World Events, Volume 39, March, 1993 Togo, Page 39353.]

He attempted to legitimize his rule with a multiparty presidential election in August 1993, which was boycotted by the opposition; facing only two minor challengers, he won 96.42% of the vote, although turnout was reportedly low outside of his native Kara Region. [ [http://www.diastode.org/Droits/tete_chro.html "DÉMOCRATISATION À LA TOGOLAISE"] ("CHRONOLOGIE"), Tètè Tété, 1998 (diastode.org) fr icon.] Eyadéma officially won re-election in the June 1998 presidential election, defeating of the (UFC) with 52.13% of the vote according to official results, [ [http://www.unhchr.ch/tbs/doc.nsf/898586b1dc7b4043c1256a450044f331/4e94c4d96732fa13c1256af000379051/$FILE/G0143065.pdf "CONSIDERATION OF REPORTS SUBMITTED BY STATES PARTIES UNDER ARTICLE 40 OF THE COVENANT: Addendum TOGO"] , United Nations International covenant on civil and political rights, CCPR/C/TGO/2001/3, July 5, 2001.] amid allegations of fraud and accusations of the massacre of hundreds of government opponents. The European Union suspended aid in 1993 in protest of alleged voting irregularities and human rights violations. He was considered to be a ruthless , never shy of torturing opponents, and even having them fed to s.Fact|date=August 2007

In late December 2002, the Constitution was changed to remove term limits on the office of president. Previously, presidents had been limited to two five-year terms, and Eyadéma would have therefore been forced to step down after the 2003 election. With the removal of these limitations, however, Eyadéma was free to stand again and did so, winning the election on with 57.78% of the vote. He was sworn in for another term on . [ [http://www.presse-francophone.org/agence/archivesmois/politique/poljuin03.htm "Le Président Eyadema a prêté serment"] , UPF (presse-francophone.org), June 20, 2003 fr icon.] Another constitutional change was to reduce the minimum age of the President to 35 years, rather than 45. As Eyadéma's son was 35, many observers assumed that he was opening the way for a dynastic succession should he die suddenly.

Eyadéma constructed a large palace near his family home in Pya a few kilometers north of . He was the chairman of the from 2000 to 2001, and he attempted, unsuccessfully, to mediate between the government and rebels of in the conflict that began in that country in 2002. The sent a mission on , to evaluate the state of in Togo and to start a procedure of democratization of Togo. The expedition intended to open a dialogue between the state and the opposition. The team was supposed to meet with many politicians from other parties than Eyadéma's party, Rally of the Togolese People. But because of the criteria imposed by the government, politicians such as , and Professor boycotted the meeting. The European Union team cancelled the meeting since discussions with the government were almost impossible. The opposition party UFC wanted the release of 11 men held by the government. Finally, the European Union experts met each political figure individually and in private. The respect of human rights and of the press in Togo was another area to be investigated by the European Union experts.

According to BBC News, Eyadéma claimed that democracy in Africa "moves along at its own pace and in its own way."

On , , he died "as he was being evacuated for emergency treatment abroad", according to a government statement. Officials have stated that the cause of death was a heart attack. At the time of his death he was the longest-serving in . He fathered more than a hundred children with numerous women.Fact|date=August 2007

Zakary Nandja, chief of the Togolese army, pronounced his son as the new President of Togo. , president of the Commission of the African Union, immediately declared this act to be a military coup d'état and against the constitution. Other organizations, such as the International Community and ECOWAS, also did not approve the designation of Faure Gnassingbé as President.

Eyadéma's funeral was held on , in the presence of many African Presidents. Presidents of Benin, of Ghana, of Cote d'Ivoire, of Niger and of Nigeria attended the ceremony. International politicians also attended the funeral. On , Eyadema's family and the RPT party paid him a final homage in his hometown of Pya.