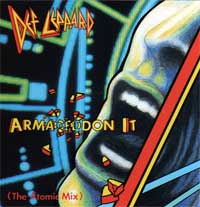 "Armageddon It" is a song by British band from their album "Hysteria". It was released as a single in and went to Number 3 in the US (their third US Top Ten hit).

The actual line of "Armageddon It" is meant to be a word play on the line "I'm A Gettin' It", thought up by the band during the recording sessions for the "Hysteria" album.Fact|date=November 2007 The vocal style of the song is described as " meets T.Rex", according to singer .

The video for the song was the second to feature Def Leppard in a live arena setting. On February 12 & 13 1988, the band recorded two shows at the in , for a future live film release. However, a month later, "Armageddon It" was set to be released as the fourth single off the popular "Hysteria" album and a promo video clip was urgently needed.

From the band's end, there was hesitation to film another concept video. While they were happy with the results for "Hysteria" (the single) and "Animal", they were very unsatisfied with the way "Pour Some Sugar on Me" had turned out for its concept.

Therefore, an idea was pitched to quickly create a video edited from the Denver footage. It was another hit in the UK, reaching the Top 20. Months later, it was released in the United States and was even more successful, reaching the Top 3.

However, "" was the first song used there for the "live" concept (in fact, many of the scenes are the same in the two) but instead of filming a different video, slight changes were made using footage filmed in October at the Omni in .

*On the recorded version (and during the "Hysteria" tour), the solo is preceded by Joe Elliott's call to "C'mon Steve, get it". Following his death in 1991, this line was either replaced by "C'mon, boys" or simply removed, except on the compilation album "" (1995).
*The b-side to the US release of "Armageddon It" contains a cherished rarity for Def Leppard fans: a cover of Engelbert Humperdinck's "Release Me", but sung by guitar tech (and later tour manager) under the alias of "Stumpus Maximus".
Def Leppard is credited with background vocals as "The Good Ol' Boys". The song is remembered for its off-key bombast and humor, and turned Mortimer into an unofficial member of the band. The track is included on the "deluxe edition" 2006 re-issue of "Hysteria"..