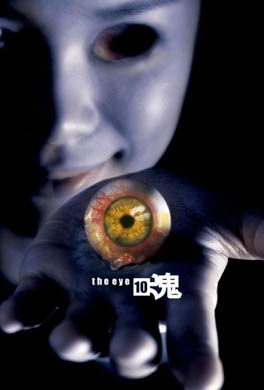 Though the numeral given in the title is 10, this is not an indicator of chronology. The third in a series by the Pang Brothers, the film takes place after the events of "The Eye" and "", though probably not much further in time. It chronicles the tale of five teenagers who read from a book titled "The Ten Encounters", which details 10 different methods for seeing the dead. Hence, the 10 in the title.

In Thailand, Chongwai is welcoming his friends Ted, Ted's cousin May, his friend Kofei and Kofei's girlfriend April from Hong Kong. While in a tourist tour, they see an accident on the road, and when they return to Chongwai's home, they decide to tell ghost stories. Chongwai shows them a mystic book called The Ten Encounters with ten ways to see spirits and they decide to play it's game, which they can begin on any step. Once the game begins, they must finish it or forever be haunted by ghosts.

Chongwai reveals the history of where he got the book from. One day when he took the wrong bus and got lost, he arrived at a book store to ask for directions where he encounters the book on the shelf. The owner takes the book from Chongwai's hands and tells him he must pay before reading it. The man offers him a discount saying how Karma led him to that book and sells it to Chongwai for 500 Bhat. The man tells Chongwai not to open to the last page or be forever cursed. During the night, a strange wind storm occurs and flips the book to the last page. In it, it reveals the book costs fifty Bhat.

They begin the game on step three where they tried the spirit glass game where only Kofei sees the ghost. The ghost moves the glass around until Chongwai's mother appears and scares them. Chongwai reveals to his friends his mother is a spiritualist. Afterwards they went to an intersection where they attracted ghost with the fourth method. Ghosts arrived where everyone but May was able to see them. May frustrated by being unable to see ghosts tells them to continue the game, even though everyone else is afraid to continue. They continue onwards to method five where they are playing hide in seek in a forest with May being the seeker. May finds everyone except for Kofei, who as said in the book, is the missing person with the ghost. He is considered missing because the ghost covers Kofei's presence. May releases the black cat, hoping it will break the spell so they can find Kofei. They search around until they find the black cat dead at the tree which Kofei urinated on.

The next day, the police are called to search the forest for Kofei to no avail. April tries step six and rubs the grave soil on her eyes. Her eyes fall out replaced by red sun-like eyes. She falls unconscious where Chongwai's mother cleans the dirt off her eyes and tells her how close she was to the purgatory world. April's eyes are still intact because she did not have her eyes open with the dirt on long enough. Chongwai's mother tells his friends to leave before something bad also happen to them. April says she wants to stay and find Kofei, while her friends leave in fear. That night, April in tears, brushes her hair at midnight then her fate becomes uncertain.

Ted and May continue their lives without mentioning the occurrence of what happened in Thailand. One day while May was in the subway, she finds a umbrella held by someone invisible. She sees it and runs away. On the bus home, her umbrella suddenly pops open. May then sees a basketball rolling back and forth. She steps over it until it becomes a head and bites her ankle. She screams and jumps and the passengers on the bus tell her it's only a ball. On the way back to her apartment she sees the ball again. She tries to side step is but the ball follows her. Afterwards she starts running and the ball out runs her. She stops and the ball begins to be dribbled by an invisible person. She performs step nine, the peek-a-stoop to find a boy dribbling the ball. The boy performs the peek-a-stoop and reveals his rotting face to her. She screams and enters her house where the basket is thrown on the door and calls Ted.

Ted on his way to May receives a phone call about the disappearance of April. Later, he takes the elevator to the floor where May lives, while encountering many ghosts on the way. He finds the ball May tells him about and kicks it, only to become possessed. Once possessed, Ted seems to be pop break dancing. A pair of break dancers arrive and figure Ted is challenging them. After a break dancing battle, Ted, still possessed, walks on the wall and stands on the ceiling. The dancers and viewers who have come to watch them dance leave after figuring out Ted is possessed. Ted, unpossessed, regains consciousness after his fall. He grabs the girl who is in the hallway and tells her it's dangerous and to come with him.

They enter May's room who is wrapped in a blanket with two bug zappers where they talk. Ted asks where that girl he bought in is and she reveals he came in alone. Ted receives a flash back and plays his video camera of the recording of the accident which reveals the dead body of the girl he just bought in. He perfects a peek-a-stoop and finds the girl and scream. They leave the house. The girl watches the film and realizes she's dead and crosses over to the other side in a blinding flash of light.

Chongwai is studying the curse that the book places on them and visits the book store. He finds the book and the pictures of the characters have been replaced by him and his friends. He finds out the person who sold the book is the one who is doing the curse. Before he gets to ask questions about it, his mother pulls him away and tells him that man and the curse are more dangerous than he thinks.

Ted and May return to Thailand to try and beat the curse. They figured if they completed the game, they can escape the curse. Thus begins step ten. Ted and May wear traditional Chinese funeral clothes and go to sleep. Before so, Chongwai tells them they have a limited time in the purgatory world and when they hear the bell, they must go into the light to return.

In purgatory, Ted and May encounter ghosts who surround them. They chase the ghosts away with their breaths, which seems to damage the ghost in some way. They continue onwards and find the ghost who was covering Kofei. He reveals to them he's been waiting for over an hour for them where they reveal he's actually been gone for a month. They become surrounded in great numbers until April breaks through and guides them to a safe place to run to.

Ted, May, and Kofei hear the bell and they see the light. April reveals she does not and reveals that because she thought Kofei was dead and that step eight was a failure, she slit her wrist deeply and died. Kofei tells them he will stay here with April and tells Ted and May to go. The light begins to suck and push everything. Kofei pushes Ted and May to the light.

Ted and May end up on the mats where they were laid. Chongwai was no where to be seen. They enter the house only to appear at the hallway where they see two male teens playing with the haunted basketball. The teens kick the ball towards Ted and May and they run right past the two. Ted and May touch each other and find each other to be solid, and are confused by what is happening.

Meanwhile the scene changes to Chongwai and his mother ringing the bell over the unconscious bodies of Ted and May. Chongwai, released from the curse, is distraught over the loss of his friends. Chongwai's mother reveals the curse of the book was dangerous and that the only way out was the death of someone.

The ten methods for viewing the dead as described in "The Ten Encounters" are as follows:
# A corneal transplant from a donor who is psychic (as seen in "The Eye")
# Attempting to commit suicide while pregnant (as seen in "").
# Playing the "Spirit Glass" game (similar to Western boards).
# Tapping chopsticks on an empty bowl with enough food for three at an intersection to attract hungry spirits.
# Playing hide and seek at midnight while holding a black cat.
# Rubbing the dirt from a grave around your eyes.
# Opening an umbrella while indoors.
# Brushing your hair at midnight while staring into a mirror.
# Bending over and looking between your legs (called the "Peek-a-stoop" in the film).
# Dressing up in "used" funeral clothes whilst sleeping to fool the dead into believing you are one of them. (Funeral homes have been known to display a body in a nice outfit, only to switch it before burial and either re-use it on another body, or the mortician may keep it for himself. This would explain how "used" funeral clothes may be obtained.)