The Return of Jafar

The Return of Jafar 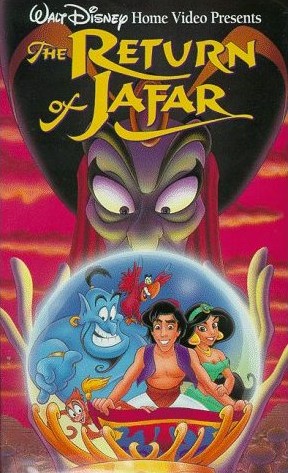 The movie centers on Jafar, the villain from "Aladdin", trying to gain his revenge against Aladdin, , and the , and become the ruler of Agrabah.

It was the first Disney direct-to-video animated feature release, and is currently available on Special Edition (with "Aladdin:" added to the title), with digitally restored picture and remastered sound. The Special Edition DVD went back to the Disney Vault on Jan. 2008.

This was the first and only "Aladdin" full-length production without the original voice of the Genie, . He was replaced by , who also voiced the Genie in the animated series as well as in "" and is also known for voicing . Williams returned as the Genie in "".

Jafar orders Iago to release him from his lamp, but Iago, tired of being treated badly by Jafar, throws the lamp into a nearby well. He returns to Agrabah, hoping to convince Aladdin that he had served Jafar only because of a spell cast on him (though this is untrue). He meets Aladdin and insists that he is innocent, but Aladdin is not fooled and tries to capture him. While chasing Iago, Aladdin has a run-in with some criminals who try to kill him (those specific criminals, led by , picked the town clean once, and Aladdin robbed them in revenge), but he is saved by Iago. Now respecting Iago, Aladdin returns with him to the palace, where they are greeted by Genie, who has returned from seeing the world and is glad to be home in Agrabah.

Meanwhile, Jafar, by luck, is found by Abis Mal. As Jafar is a , he is handicapped by the incompetence of his new "master". Jafar desires to be free so that he can rule Agrabah, but needs Mal's co-operation to do this. Though Abis Mal is technically his master, Jafar still asserts his power by sending Abis Mal to the ocean's bottom after he wishes for sunken treasure. Abis Mal is forced to use his second wish to return to land. After this, Jafar has Abis Mal take him to the palace, where he coerces Iago into serving him again. Aladdin and the Sultan depart to have a discussion at a place suggested by Iago. After they leave, Jafar confronts the Genie and Abu in the Palace gardens and shows his power as he sings "You're Only Second Rate", before imprisoning the pair.

Meanwhile, the Sultan arranges for Aladdin to be the future . As Aladdin thanks Iago for suggesting the talk, he is ambushed by Abis Mal, accompanied by a group of cloaked horsemen. Aladdin, helpless without Carpet (who is trampled by one of the horses), fails to prevent the Sultan's capture. When Carpet recovers, Aladdin gives chase, only to be shocked when the horses gallop off the cliff and sprout wings. Despite his surprise, Aladdin takes back the Sultan. He is about to make his escape when one of Abis Mal's horsemen creates a waterspout, sucking the Sultan off the carpet and into the waterspout. Aladdin turns the carpet back to save the Sultan, but he and the carpet are sucked in. Aladdin, however, is thrown back out and into the raging river. Abis Mal sabotages Aladdin's attempts to save himself, and he plummets over the edge of a waterfall. Abis Mal enjoys his moment of glory, but one of the horsemen uses magic to slow Aladdin's fall, saving him from death. Aladdin then gently floats over the deadly rocks and is dropped into safer water, to Abis Mal's great frustration.

It is finally revealed that all the horsemen were Jafar in disguise. Abis Mal rushes towards Jafar, expressing anger that Aladdin was saved ("He was this close to being a greasy little smear on the rocks!"). Barely keeping his temper, Jafar reminds Abis Mal of the plan and congratulates Iago for his work. Iago, however, is clearly distressed at betraying Aladdin and hated himself for that. Later, at nightfall, Aladdin recovers, and is then left to crawl back to Agrabah on foot.

When Aladdin returns, Jasmine accuses him of murdering the Sultan and sentences him to death. Aladdin is shocked, but the truth is that Jasmine was also captured while Aladdin was away, and Jafar disguised himself as her when he issued the death sentence. Jafar reveals his identity to Aladdin moments before Aladdin's time of execution, but just as the sword is about to fall, Iago gives in to his conscience and frees the Genie, who rescues all of them, to atone for his actions. Genie tells Aladdin that, in order to destroy the maliciously evil genie, Jafar's black lamp must be destroyed before Abis Mal wishes him free. They are all grateful to Iago for setting them free and they offer redemption, but Iago goes in exile, fearing Jafar's wrath for helping the prisoners escape and preventing Aladdin's death.

Jafar and Abis Mal celebrate Aladdin's death, and Abis Mal wants his third wish. However, Jafar refuses unless the wish is used to set him free. As they are arguing, they spot Abu about to grab the lamp. Aladdin runs up and tries to grab it as well. When he sees Aladdin taking his lamp, Jafar attacks him with a blow that nearly knocks both Aladdin and Abis Mal off the edge of a now-crumbling balcony. The two try to get back into the palace, but fall through the crumbling structure. Aladdin and Abu are saved by Genie, while Abis Mal gets stuck on a tree branch and is unable to reach the lamp or properly move. Aladdin and his friends fly on the magic carpet to get the lamp, but Jafar (in his huge hot red genie form) comes out of the ground before them. Genie (disguised as Aladdin) distracts Jafar as Aladdin goes after the lamp on carpet, but Jafar is too quick and he uses his power to turn carpet to glass, causing it to collide with the ground and shatter. Aladdin is feet away from the lamp, but Jafar stops him again by making the ground under him come up like a rock-shaped .

In a rage of fury and driven mad by his desire for revenge, he makes the ground crumble away into a lake of molten and a begins. Jasmine, Genie and Abu find themselves trapped on a pedestal surrounded by the incandescent lava. The rock Aladdin is on also falls into the magma and floats around the lamp's pedestal, but Aladdin is unable to reach it. Jafar laughs at Aladdin to give up, while he slowly slides Aladdin's rock down towards the surface of the magma. Suddenly, Iago swoops from the sky with a yell, narrowly missing Jafar, and heads for the lamp. Jafar, realizing that Iago has turned against him, turns his attention to him instead. Jafar fires at Iago just as the parrot reaches the lamp, and connects, badly injuring him and smashing him against the wall of the pit. Jafar sounds his triumph by laughing, commenting cynically "Good help is so hard to find these days, isn't it, Aladdin?". Iago has meanwhile fallen with the lamp onto a ledge, and as Jafar turns back towards him, uses his last ounce of strength to kick the lamp. The lamp tumbles down the rocks into the magma, and Jafar screams in agony as it begins to melt.

The pedestal that Genie, Jasmine and Abu are on starts to collapse into the magma as Jafar writhes. Genie stretches out to form a bridge to the higher ground to which Jasmine, Abu and Genie himself quickly escape just as the rock sinks to the magma's surface. The rock that Iago is on starts to crumble as well, and Aladdin grabs him as he makes his escape as well. Screaming, Jafar fades to a skeletal form and violently implodes into a cloud of dust, destroyed. Everything that Jafar previously did reverses itself: the magma disappears and the pit closes, the Palace gardens are restored, and carpet is revived. After the showdown, Iago lies motionless in Aladdin's hands. Aladdin wonders on Iago's condition, saying that he thought a genie could not kill anyone. This proves true, as Iago revives with a cough, muttering weakly; "You'd be surprised what you can live through.."

Iago has become Aladdin's true friend. Aladdin tells the Sultan that he cannot be his vizier, prompting Iago to ask Aladdin what more he wants and Aladdin simply answers, "The world." He wants to see the world, and can't just stay in the Palace. Jasmine says that she is going to see the world too, but Iago objects with "Why do I keep getting hooked up with these 'warped people'?!" and "Shouldn't somebody ask what the "brave parrot" wants to do?"

After the credits, Abis Mal, still stuck on a tree branch, suddenly realizes that with Jafar and the lamp gone, he will never have his third wish.

When Disney was publishing their own comics in the mid-90s, they produced a two issue Aladdin comic presenting an alternate version of "The Return Of Jafar". It was titled "The Return Of Aladdin". The comic is introduced by the Merchant from the first movie.

The story starts off showing that Aladdin has been particularly bored of palace life. Meanwhile, Jafar has escaped the Cave Of Wonders. Iago is given the task of finding the right master for Jafar to manipulate. Their search seems hopeless as some people are able to enjoy all three wishes or messing up.

They find someone to use the lamp, who is known as Isabella, a master magician. Isabella is similar in appearance to Jafar (except his clothing is green). His first wish is to return to Agrabah Palace (as he performed entertainment to the sultan in #1). His second wish is for an army of soldiers to pursue Aladdin and Jasmine when they catch on to Jafar's presence. He is persuaded to use his third wish to trap Jafar and Iago in the lamp again, sending them back to the cave.

Due to persuasion by the Genie, the Sultan hires Isabella to a permanent entertainment job at the palace. The end of the story shows the merchant having a black lamp similar to Jafar's, but he claims it to be worthless.

The plot of this movie is loosely used in Agrabah, one of the worlds in "", only with Abis Mal being replaced by the Peddler from the first film.

Furthermore, there is a mild allusion to the Agrabah boss battle in , Sora must fight Jafar in Genie form surrounded by a lava pit with raising and lowering levels, while Iago flies above with Jafar's lamp. However, only striking the lamp will have any effect on Jafar's health. This fight also takes place in the second game, , and the Japan Exclusive remake, re:Chain of Memories. In both versions of CoM it the boss fight is due to the majority of the game being illusions created from Sora's memories. A second playable charcter, Riku, also fights the boss in his mode.

Abis Mal made many reappearances in the "Aladdin" animated TV series afterwards.