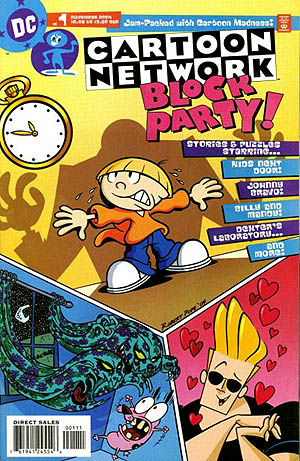 "Cartoon Network Block Party" is the current title to an of anthology s published by featuring 's programming. It began publishing in June 1997 as "Cartoon Network Presents", but has since changed its title to "Cartoon Network Starring" and "Cartoon Cartoons", restarting at issue #1 each time, before taking on its current name in September 2004.

The comic began as "Cartoon Network Presents" in June 1997, when DC acquired the comic licensing rights to Cartoon Network's programming, among them the cartoons. Before 's merger with in 1996, the Hanna-Barbera license had already been in use by , and it wasn't until the license expired in April 1997 that DC got the rights.

"Cartoon Network Presents" was published alongside two separate comic books featuring three of Hanna-Barbera's most popular cartoons - "", and " and " (the latter of which lasted for 21 issues, while the former is still in publication today). "Cartoon Network Presents" consisted of stories based on other Hanna-Barbera properties (although the last issue prominently featured , despite the character's lack of popularity); these were mainly billed as "Cartoon All-Stars". Much of the stories featured in these issues featured crossovers between the various shows. Stories based on the shows in the programming block and new shows "" (mainly the "Dial M For Monkey" segments; Dexter himself was only featured in the first issue), "", and "" (the only show to be featured in these comics) were also abundant in this title.

Notably, "Cartoon Network Presents" marked the last new comic book title to feature the classic Hanna-Barbera characters (excluding "Scooby-Doo"). Its run ended after two years. Given that the comic still features stories based on original shows that Cartoon Network no longer airs, it is unknown why the classic characters have never returned to comics.

In July 1999, the comic was restarted as "Cartoon Network Starring". Though it followed the same formula as its predecessor, the comic shifted focus away from the older cartoons that had been featured previously, instead focusing on the network's original programming, the (even though "Space Ghost: Coast to Coast" was never labelled as such). In this title, "" and "" made their comic debuts.

"Cartoon Network Starring" was published alongside a new monthly comic based on of "Dexter's Laboratory", which ran for 34 issues, lasting until February 2003. "The Powerpuff Girls" would also get their own monthly comic book in March 2000; it ran for 70 issues, ending in January 2006.

In January 2001, the comic book restarted at issue #1 once again, this time having the same title as the name given for the shows it was based on. Unlike the previous incarnations, though, the issues now featured stories based on multiple shows rather than just one show per issue.

At 33 issues, this version of the comic has lasted the longest (so far), and it is also under the title "Cartoon Cartoons" that the most new shows joined in on being featured in the comic: "", "", "", and "" at issue #1, and "" and "" made their comic debut in issue #14 ("" went solo in issue #22). In addition, following the cancellation of the its own comic book, new stories based on "Dexter's Laboratory" were added to this anthology in issue #17.

The last issue of "Cartoon Cartoons" was published in August 2004.

With the revival of as a mascot, the Cartoon Network anthology comic was renumbered and retitled again to its current monnikor. For the new incarnation the idea of multiple adventures in one comic was conceived. Now each comic either has 3 adventures on 3 different shows or occasionly only 2 adventures.

In May 2006, "Cartoon Network Action Pack!", a new anthology title, began publication. This one features stories based on of Cartoon Network's action-oriented shows, including "", "", "", and "". The "Codename: Kids Next Door" stories will also be moving to this new title, and it is also featuring stories starring . CNAP currently features "" and will also feature "".