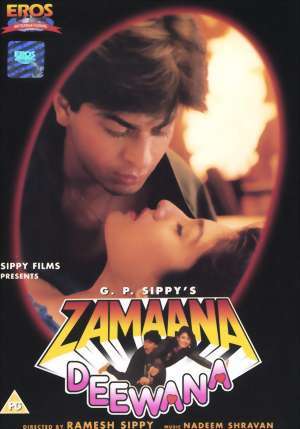 "Zamaana Deewana" (: ज़माना दीवाना, : زمانہ دیوانہ ,: "Crazy World") is a movie which was directed by and released in in 1995. It stars and as the leading pair, with playing their parents, respectively. and make supporting roles as well.

Suraj () and Lala () were good friends before falling prey to the vicious tricks of Sundar (Tinnu Anand), so much so that Lala believes his wife is dead and Suraj is to blame for that.

They become greatest enemies and create chaos in the city by way of gang wars. Asst. Commissioner of Police () has a criminal psychologist KD () and Shalini (Kiran Joneja) weave a plot to bring Rahul (), the lively and spirited son of Suraj, close to Priya (), the ever-so graceful and elegant daughter of Lala, hoping to bring the two sides together.

Needless to say that good triumphs over evil, but only after a number of out-and-out entertaining songs and dances, jestful capers, taut-action sequences, endearing romance, tongue-in-cheek dialogues with a generous sprinkle of heartwarming bihari-accented Hindi.The story is similar to because of the war between the two families.