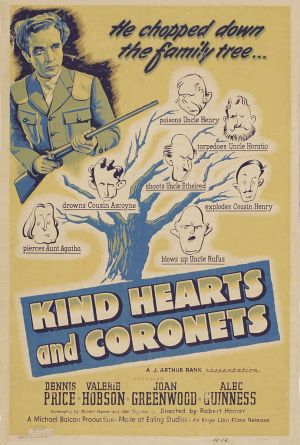 from the novel by

"Kind Hearts and Coronets" is a 1949 British film produced by . It was directed by , written by and Hamer, and very loosely based on a book, "Israel Rank", by . The title is a quotation from 's 1842 poem "", which proclaims that "Kind hearts are more than s, And simple faith than Norman blood."

The film stars as a potential heir to a , but eight members of the D'Ascoyne family stand in his way. All eight (including one woman) are played by . Guinness is also depicted in a painting of a family ancestor. There are also notable performances from and as a "".

The story is set in the . Louis Mazzini () is the son of a woman ostracised by her noble family for eloping with an Italian singer. Upon her death, the D'Ascoynes refuse to allow her to be buried in the family crypt. As a result, Louis plots revenge, aiming to succeed to the Dukedom of Chalfont, but eight relatives stand between him and the title.

Louis sets out to murder them all, in various inventive and blackly humorous ways. He manages to dispatch six of them. The other two die without his "assistance": his kindly banker employer, who dies of a stroke when he learns that he has inherited the dukedom, and Admiral D'Ascoyne, who obstinately steers his warship into a collision with another, and remains saluting on the bridge while it sinks beneath him (satirising the sinking of HMS "Victoria" in 1893). [cite web |url=http://www.nmm.ac.uk/server/show/conWebDoc.17870 |title=Last Man Standing |publisher=nmm.ac.uk ] He confesses to the last of the D'Ascoynes what he did and why. He then kills him and finally inherits the title.

Complications ensue when Louis is torn between two women, Sibella (), his longtime sensual paramour, and the more refined Edith D'Ascoyne (), the widow of one of his victims. Louis marries Edith, and Sibella becomes jealous. When Sibella's dull husband Lionel () kills himself, she hides the suicide note and, ironically, Louis ends up being tried and convicted of murdering one of the few people he "didn't" dispatch.

In prison awaiting execution, he writes his memoirs, detailing his exploits. At the last moment, Sibella "finds" the suicide note, saving Louis. As Louis steps through the prison gate to freedom, he finds two carriages waiting for him: in one, Edith, and in the other, Sibella. As he hesitates, he repeats to himself the couplet from "". "How happy could I be with either, Were t'other dear charmer away!" When a publisher approaches him and asks for the publication rights to his memoirs, Louis suddenly remembers the manuscript he left behind in his cell.

To satisfy the , several changes were made for the American audience. [cite book |last=Slide |first=Anthony |title="Banned in the U.S.A..: British Films in the United States and Their Censorship, 1933-1966" |origyear=1998 |url=http://books.google.com/books?id=zOp2WxH5yscC&pg=PA90&lpg=PA90&dq=%22Kind+Hearts+and+Coronets%22+%2B+alternate+ending&source=web&ots=u-7hRbmkt2&sig=pzXlFh2FYwSGj0upYUZpSJ6gQHY&hl=en&sa=X&oi=book_result&resnum=1&ct=result#PPA90,M1 |format= |accessdate=2008-10-02 |publisher=I.B. Tauris |isbn=1860642543 p. 90] About 10 seconds was added to the ending, showing that Louis' memoirs are discovered before he can retrieve them. This ending is available as an extra on the DVD. In addition, some of the dialogue between Louis and Sibella was cut to tone down the adultery, some derogatory lines about the Parson were deleted, and in the song "", "sailor" replaced the word "nigger". In all, the American release was six minutes shorter than the British.

Difference from the novel

Louis' father in the novel was rather than Italian. Horniman had been accused of , so the film-makers decided to play safe by changing his background.Perhaps there is a remembrance to the Toselli affair too. The Italian composer and pianistToselli married the divorced wife of the Kronprinz of Saxony in Germany; they had a son.

In the novel, the protagonist is a vulgar and unpleasant character, named not Louis but Israel. The protagonist of the film is very much more refined and distinguished. Israel's mother is not the daughter of an aristocrat but a distant relative.

* as Louis Mazzini and Mazzini's father
* as The Duke, The Banker, The Parson, The General, The Admiral, Young Ascoyne, Young Henry and Lady Agatha. Guinness was originally offered the parts of only four D'Ascoynes. "I read [the screenplay] on a beach in France, collapsed with laughter on the first page, and didn't even bother to get to the end of the script," he recounts. "I went straight back to the hotel and sent a telegram saying, 'Why four parts? Why not eight!?'" [cite web |url=http://www.austinchronicle.com/gyrobase/Issue/review?oid=oid%3A342902 |title=Kind Hearts and Coronets |publisher=austinchronicle.com Austin "Chronicle" |author=Raoul Hernandez |date= ]
* as Edith
* as Sibella
*John Penrose as Lionel

appears briefly as the Lord High Stewart at the trial in the House of Lords towards the end of the film.

A young has a brief appearance at the end.

The collected letters between and show that both novelists were employed at Ealing, separately and at different times, to work on the screenplay; nothing either contributed made it to the final shooting script.

*Louis's line on killing Lady Agatha - "I shot an arrow in the air, she fell to earth in Berkeley Square" - is a parody of "I shot an arrow in the air, it fell to earth I know not where" from 's "The Arrow and The Song".
*Early in the film, Louis quotes 's phrase that "When a man knows he is to be hanged the next morning, it concentrates the mind wonderfully." (Louis adjusts the line from Johnson, who said "in a fortnight" rather than "the next morning.")
*Louis's quip that he sent "caviar to the general" is a quotation from "" (Act 2, Scene 2).
*Louis quotes the following couplet from the "" at the end of the film - "How happy could I be with either, Were t'other dear charmer away!"

A radio version of the script, starring and , has been broadcast on .