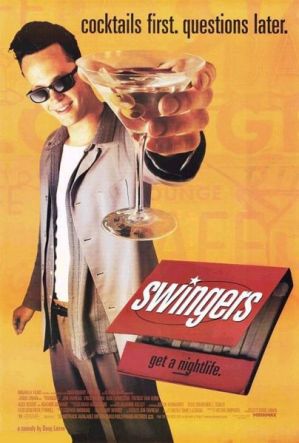 Swingers is a film released in 1996 about the lives of single, unemployed s living on the 'eastside' of during the 1990s . Written by and directed by , the movie starred Favreau and , and also featured performances by and Heather Graham.

The characters in the film clearly idolize the swinging lifestyle of and the ; in fact the number and makeup of the group of friends are a homage to the original group.Fact|date=September 2007

Mike (), a recent transplant to , has recently broken up with his long-time girlfriend of six years and is still having trouble letting go and moving on. His friend Trent () takes him on an overnight trip to Las Vegas in an attempt to get him back in the game. Trent picks up a cocktail waitress and her actress friend, but Mike's obsession with his ex-girlfriend spoils the one-night stand. Back in Los Angeles, Mike attends various and Los Feliz hot spots while his swinger friends coach him on the rules of seduction. Mike makes several awkward attempts at speaking to women, but they all end disastrously. Along the way, the group discusses movies, video games, and their floundering careers in show business. When Mike learns to accept himself and eschew the pretenses and self-promotion involved in the Hollywood dating scene, he finally connects with a beautiful girl named Lorraine. The next day, he gets a call from the ex-girlfriend he's been obsessing over but rejects her offer to get back together when Lorraine rings in on the other line. While discussing Mike's new situation at a diner, Trent interrupts to make a disastrous attempt at flirting with a woman nearby. As Trent tries to recover from the embarrassment, Mike smiles as the tables turn.

* as Mike Peters. A struggling from New York, Mike recently broke up with his long-term girlfriend. Still pining over his loss, and unfamiliar with the dating game, Mike has difficulty meeting new women.
* as Trent Walker. An aspiring actor, Trent is Mike's closest friend. Trent is also a loud, charismatic, and occasionally obnoxious swinger. He makes it his personal mission to teach Mike the swinging lifestyle.
* as Rob. Mike's friend from New York, Rob is a recent arrival to Los Angeles and even less knowledgeable about the swinging scene, but he is not fresh out of a relationship and has a much more optimistic view of life. He provides a sympathetic ear to Mike and considers taking a job at to pay the rent.
* as Sue. A hot-headed swinger, Sue discusses the finer points of seduction with Trent, but is somewhat less sympathetic to Mike's problems. Mike later tells Rob that he is named after the Johnny Cash song "A Boy Named Sue."
* as Charles. A swinging acquaintance of the group and another struggling actor. Charles accompanies the group while bar-hopping around Hollywood, proclaiming each place "dead" as they leave.
*Heather Graham as Lorraine. A woman that Mike meets at a bar, Lorraine has a good sense of humor and is not overly concerned about the rules of dating. She's also new to the LA scene, having left a relationship behind in .

Hollywood and show business is a significant theme in the film, and it makes many references to other movies. Trent's license plate reads "THX1138", a reference to the license plate of a in 's "", which was itself a reference to Lucas's previous movie, "". The theme music to "Jaws" is used when Trent has an unpleasant conversation with a woman.

The film also emulates a number of famous sequences from popular movies. The diner scene and slow-motion credit sequence from "" are emulated as the swingers discuss movies and then walk out to their cars to go bar-hopping. The long following shot through the side entrance of a club from "" is also emulated by the swingers as they enter a club through the kitchen entrance. Both movies and directors and are discussed by the group.

Another film directly referenced in the movie was "" when Sue has an exchange of words with a group of wannabe thugs and then pulls a gun on them.

The Godfather is also referenced in Swingers when Trent says "bone me a Fredo." This refers to the scene in The Godfather where Mo Green says that Fredo Corleone was "banging" cocktail waitresses two at a time.

Sue and Trent get carried away while playing "NHL 93" for the Genesis while Sue wears a jersey. Many people believe that they are playing NHL 94, but in NHL 94 you could not make players head bleed which occurs to Gretzky in Swingers.

Favreau wrote the screenplay to "Swingers" in two weeks, with various friends in mind for key roles. One scene, in which Trent yells at Sue for insulting Mike, was written at Vaughn's request to make it clear that beneath Trent's swagger, he truly cared for Mike as a friend. Favreau and his friends gave reader's theater performances of the script to drum up interest and capital for the movie.

"Swingers" was filmed on location at several Los Angeles nightclubs, particularly in the hip neighborhood, including the Dresden Lounge and the Derby. The Vegas scenes were filmed primarily in two locations, with the exterior casino shots taking place at the and all the subsequent interior shots being filmed at the , farther north in downtown Vegas.

"Swingers" was a critical and financial success. The film had a total budget of about $250,000 and a worldwide theatrical gross of $6,542,637. It served as a breakthrough for , who gained public exposure and critical acclaim for his performance in the film. In particular, he caught the eye of when a copy of the film was sent to the director so they could clear the rights for the "Jaws" music. Spielberg later cast Vaughn in "". Director Doug Liman also used the film to help launch a successful career in Hollywood, and it was the first major film for Ron Livingston.

The release of the film coincided with the of the 1990s. It increased interest in 1960s culture, Hollywood nightlife, and swing music. Some of the slang used in the movie became popular in the years following its release, especially the use of the word "money" as a catch-all term of approval or quality. The exclamation "Vegas, baby!" also became a common quote when referencing the city.

The film was voted as the 14th best film set in Los Angeles in the last 25 years by a group of "" writers and editors with two criteria: "The movie had to communicate some inherent truth about the L.A. experience, and only one film per director was allowed on the list".

*Mikey's apartment is located in the area of Los Angeles, just a couple blocks from the Dresden Room **FYI - I'm fairly certain that his apartment is in Hollywood on Franklin....just across from the Mayfair Market**

*The Dresden room is a popular (classic) bar and club in the Los Feliz neighborhood, located at 1760 N. Vermont Ave. Marty & Elayne, who are performing in the Dresden scene in the movie, perform at the Dresden in real life several nights a week.

*The cafe where various factions of the crew meet and eat was the Hollywood Hills Coffee Shop (now renamed under new ownership as the 101 Cafe) and is part of the Best Western Hotel on Franklin Avenue near Hollywood, and near the 101 freeway.

*The bar where the characters dance is The Derby in Los Feliz, on the corner of Hillhurst and Los Feliz Blvd, which still hosts swing dancing nights every week. 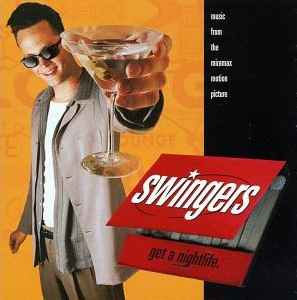 Cover size =
Caption = Swingers Original Soundtrack
Background =
Released = ,
Recorded =
Genre =
Length = 43:20
Label = Hollywood Records
Producer =
Reviews =
Compiled by =
Chronology =
Last album =
This album =
Next album =
Misc = There are two collections from the motion picture. The first soundtrack was released in 1996 and contained music included in the film. The second was released in 1999 and contained by "" and a studio version of "Staying Alive" by lounge act "" as well as other tracks inspired by the film.

"Swingers Too!: More Music From... "Swingers"