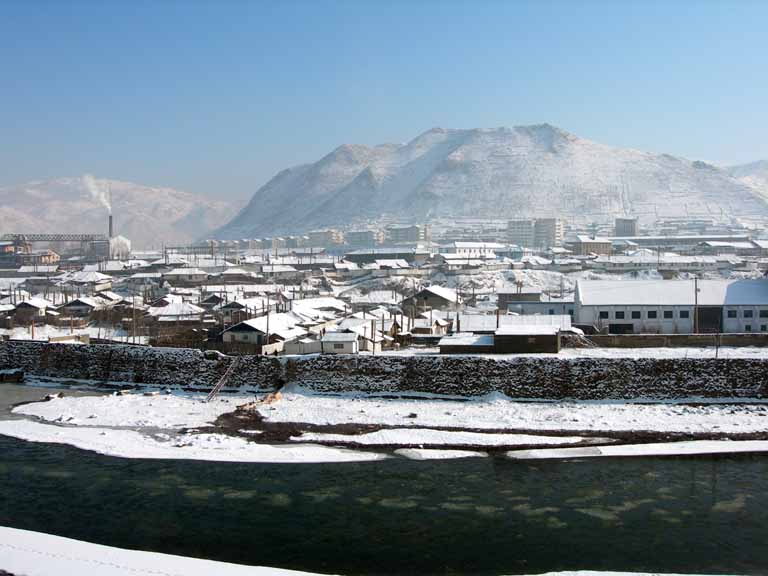 Hyesan is a city in the northern part of the northern province of . It is a hub of river transportation as well as a product distribution centre. It is also the administrative centre of Ryanggang Province. As of 2000, the of the city is estimated to be 110,000.

The city is located in the at the border with the ( province), from which it is separated by the Yalu (Amnok) River. Changbai is the closest Chinese city across the river.

It is located in the coldest area of Korea, and recorded a record low temperature of -42 ℃ in 1915.

Hyesan has lumber processing mills, paper mills and textile mills. Since the North Korean economic crisis that intensified in the mid 90's the city suffers from economic stagnation and some factories in the city are closed. Reports and pictures that were taken from the Chinese side of the river are shown "Ghost City": there is almost no movement in streets and in the night the city is dark and doesn't have . Residents of the city have reported to wash their clothes in the river because no water flows in the faucets.

First explored in the 1960s, Hyesan Mine produces 10,000 tons of concentrates annually, which is 80% of all North Korean copper, and the North had estimated that it will be able to continue mining copper there for the next forty years. When Gapsan Dongjum Mine, explored during the Japanese colonial period, was finally depleted and closed in 1990, Hyesan Mine became the lifeline of the nation’s copper production. At that time, the mine flooded because the pumping device stopped operating due to the lack of electricity across the country. Although the workers at the mine did their best to pump the water, they could not stop the water flowing into the mine at a speed of 480㎥/hour. In 1996, during the North’s ‘Arduous March’, electricity was not provided to the mine, leading to flooding in the mineshafts in January 1997. Hyesan Mine flooded again, as did other mines throughout the country, and lost all mining facilities. Since 1998, Kim Jong Il has budgeted 8.2 million USD to dewater the mine, and the mine was recovered using electricity and equipment provided by China.

Hyesan is connected to other cities in North Korea by road and railway.

The countryside near Hyesan has various attractions, including the , and .