Infobox Film
name = To Be or Not to Be 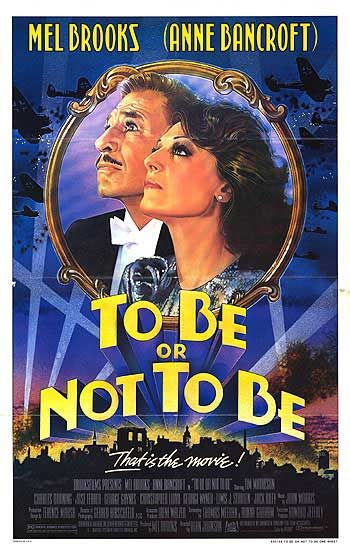 "To Be or Not to Be" is a 1983 directed by Alan Johnson, produced by Mel Brooks with Howard Jeffrey as executive producer and Irene Walzer as associate producer. The was written by and , based on the original story by , and . It is a of the 1942 film of the same title.

The film starred and with , , , and . This remake was one of the first major American films to acknowledge that homosexuals were persecuted by the , along with other . Aside from the homosexuality issue, this version was extremely faithful to the version, and in many cases dialogue was taken verbatim from the earlier film. The character of the treacherous Professor Siletsky (here spelled Siletski) was, however, made into more of a comic figure, and even into somewhat of a buffoon, whereas in the original he was the one completely serious character in the film.

* A gag starts off the Mel Brooks version with Brooks and Bancroft performing the song "" in Polish, and after the performance the two engage in a quarrel backstage - still in Polish - until an announcer calls out: "Ladies and gentlemen, for the interest of clarity and sanity the rest of this movie will not be in Polish."

* In an evident tribute to Jack Benny (Benny Kubelsky) the beleaguered couple moves into the apartment of their friend, Sascha, at Number 52 Kubelsky Street.

* Whenever the beleaguered German commanding officer, Colonel Erhardt, falls for the numerous tricks played on him, he roars for his assistant, "Schulz!". For his humorous performance of Erhardt, was nominated for the Best Supporting Actor .

* On the movie's , but not in the movie, is a novelty rap song entitled "To Be or Not to Be (The Hitler Rap)". This song was released as a single, complete with music video, and peaked at #12 on the US charts in February .