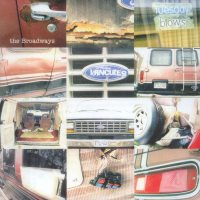 "Broken Van" is a compilation of early and previously unreleased material by . With the exception of "Fuck The Church", available only on the compilation "Where's The Beef?", it completes the band's discography alongside their sole full-length album .

Tracks 1-7 were new and unreleased, recorded in May 1998. It is though that some or all of these tracks were originally intended for release on a split CD with Baxter. [http://web.archive.org/web/20010516201626/members.tripod.com/broadways2/]

The remaining tracks originally appeared on the band's early 7" s: tracks 8-10 from "We All Know You Can Do It" (released on the band's own Bicycle Records); tracks 11-15 from "Big City Life" ().

In 2007 and 2008, announced plans to reissue both of the band's albums on vinyl and CD. "Broken Star" had long since sold out on vinyl, while "Broken Van" had been CD-only; both had for some time been out of stock on CD. [http://64.233.169.104/search?q=cache:Aua51DkHkUQJ:www.asianmanrecords.com/] In late 2007, posted a topic on the label's forum stating that he could not find a copy of Broken Van and would need a fan to provide one in order to go ahead. [http://www.asianmanrecords.com/forum/viewtopic.php?p=6873] The record went on sale in July 2008.

The primary vocalist/lyricist for each song is given.

* The title "Broken Van" appears nowhere on the album's packaging, but Asian Man catalogs and labels on new copies identify it as such.
* There was an error on the rear tracklist whereby swaps the songs "What Happened?" and "Lake Michigan" were swapped.
* "I Think I Shall Never See..." was titled "I Think That I Shall Never See..." on "Big City Life". Brendan stated during a live show [http://www.youtube.com/watch?v=fgHK3P3zsv8] that the friend referenced in the song is the same one from ""'s "25 Degrees North".
* "This Routine" was a at the end of "Dropjaw" on "Big City Life". The passage spoken by Chris at the end of the song is from 's "I, Rigoberta Menchú: An Indian Woman in Guatemala".