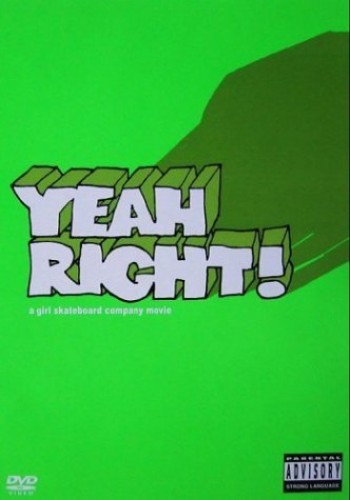 Yeah Right! Is a video by , directed by and . It is notable for its soundtrack, length, and the extensive use of never-before-seen (in a skateboarding video) special effects.

A short prologue pays tribute to skater , who died in 2001. Milton was part of Chocolate Skateboards team, a subset of Girl Skateboards.

The introduction credits for the video feature a unique series of shots in ultra-slow motion, filmed with Jonze's personal camera that is capable of shooting 100 frames per second. The camera is low to the ground and very close to the skateboarder as various flip tricks are completed.

Throughout the video, there are many special effects used. The first one seen is on the title clip, where skateboarder pushes up to an invisible ramp, goes up into the air and clears an entire road. As he lands, skateboarder Brandon Biebel shouts, "Yeah Right!"

There are several different scenes in between skaters' parts which make use of green screen technology and other camera effects. One shows the Girl skate team performing tricks and then throwing the board outside the camera's perspective, next appearing in the hands of another skater in a completely different area. It continues until breaks the board attempting a nollie over a trash can. He leaves the remains behind, which then fuse together, making the board whole again. Another shows the skaters on invisible boards, again with the use of green screen technology.

A cameo is made by . He is in a parking lot with , and preparing to perform a trick on a handrail. By framing the camera very carefully, it appears that Wilson attempts the extremely difficult trick (a ). However, while the camera was facing the opposite direction for a moment, Wilson had slipped out of the frame and is replaced by who is wearing a wig and matching clothes. Koston performs the trick down the staircase and Wilson reappears in the shot after Koston lands to make it look like he completed the trick.