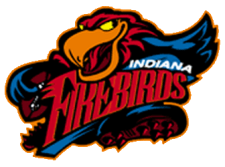 Originally called the , the team was based in from 1990 to 2000. At that time, home games were played at the Knickerbocker Arena (now known as the ). After the move, the Firebirds competed in the Central Division of the AFL's American Conference.

The Firebirds were very successful during their tenure in Albany. They won six division titles, made nine playoff appearances, and won the 1999 ArenaBowl championship.

The 2004 Firebirds just missed the playoffs after a disappointing 0-5 start. However, they finished the season winning eight of the their last eleven games and were considered by some a potential contender for the 2005 championship led by 2004 Rookie of the Year, .

However, in early September 2004, Indiana Firebirds owner Dave Lageschulte announced that his company, Lags Football LLC, would cease all business operations for the Firebirds. Lageschulte had been actively, but unsuccessfully, pursuing local investors to purchase the Firebirds since he had assumed ownership in 2002.

On , , the date of the announced sales deadline, the Arena Football League announced the termination of the Firebirds franchise and that the players would be made available to continuing AFL teams in a . However, within the week the team was purchased by Scott and Todd Hines, who run , a sportsgear company based in Indianapolis. With AFL approval, it was hoped that the Firebirds could remain operational in Indianapolis. However, this bid foundered due to concerns that the low sale price would devalue the worth of the other 18 franchises. The former Firebirds players were made available in the dispersal draft conducted on , , marking the end of one of the AFL's longest-running franchises.

On Friday, October 3, 2008, Albany Conquest owner Water Robb announced the return of the . After the move of the Firebirds AFL franchise to Indiana, an team called the took to the field to replaced the Albany Firebirds. After 8 seasons and troubles with fielding a winning team, Robb contemplated shutting down the Albany Conquest AF2 franchise. At the last moment, Robb resurrected the Albany Firbirds in the AF2 to replace the faltering Albany Conquest. [http://timesunion.com/AspStories/story.asp?storyID=726322]