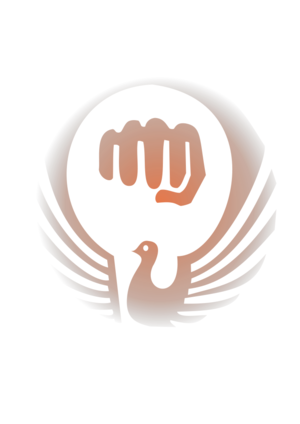 The name "Wadō-ryū" has three parts: "Wa", "dō", and "ryū". "Wa" means "harmony," "dō" means "way," and "ryū" means "style." Harmony should not be interpreted as ; it is simply the acknowledgment that yielding is sometimes more effective than brute strength. [ [http://www.usko-karate.co.uk/Wado.htm USKO] ]

From one point of view, Wadō-ryū might be considered a style of rather than karate. When Hironori Ōtsuka first registered his school with the in 1938, the style was called "Shinshu Wadoryu Karate-Jujutsu," a name that reflects its hybrid character. Ōtsuka was a licensed practitioner and a student of when he first met the Okinawan karate master . After having learned from Funakoshi, and later also Okinawan masters such as , Ōtsuka merged Shindō Yōshin-ryū with Okinawan karate. The result of Ōtsuka's efforts is Wadō-ryū. [ [http://www.usko-karate.co.uk/Wado.htm USKO] ]

To the untrained observer, Wadō-ryū might look similar to other styles of , such as . Most of the underlying principles, however, were derived from Shindō Yōshin-ryū. A block in Wado may look much like a block in Shotokan, but they are executed from different perspectives.

A key principle in Wadō-ryū is that of "" (often incorrectly referred to as 'evasion'). The Japanese term can be translated as "body-management," and refers to body manipulation so as to move the defender as well as the attacker out of harm's way. The way to achieve this is to 'move along' rather than to 'move against'—or rather than . Modern karate competition tends to transform Wadō-ryū away from its roots towards a new generic karate that appeals more to the demands of both spectators and competitors. [ [http://www.usko-karate.co.uk/Wado.htm USKO] ]

Wadō-ryū uses a typical karate belt order to denote rank. The beginner commences and 9th or 10th "" (depending on the organization and school) and progresses to 1st "kyū", then from 1st–5th "dan" for technical grades. The ranks of 6th–10th "dan" are honorary ranks. Although some other karate styles add stripes for the "dan" ranks, Wado Ryu practitioners tend not to follow that practice.

The rank at which Wado practitioners are first able to teach is usually 3rd "dan", but this depends on the organization. Some Wado ryu organizations require completion of a special course in addition to attaining a certain "dan" rank.

Schools that use the same belt color for multiple "kyu" ranks typically use stripes to indicate progress within that belt color.

"" are predefined, specific patterns of movement that incorporate and encapsulate martial techniques, concepts, and applications. The exact movements of a "kata" often vary from one organization to another, and even from one school to another within the same organization. The variations can range from gross deviations apparent to the untrained observer to very subtle minutiae. In his 1977 book on Wadō-ryū (published in English in 1997), Ōtsuka Sensei declared only nine official "kata" for Wadō-ryū: "Pinan Shodan", "Pinan Nidan", "Pinan Sandan", "Pinan Yondan", "Pinan Godan", "Kūsankū", "Naihanchi", "Chinto", and "Seishan". [Otsuka 1997, p.72] Within his text, Ōtsuka Sensei provides detailed notes on the performance of these "kata", which has resulted in less deviation across organizations on their performance. However, Ōtsuka Sensei did teach other "kata". Perhaps because Ōtsuka Sensei did not provide specific notes for the performance of these other "kata" in his text, there is greater variation in these other "kata" across organizations and schools. "Kata" associated with Wadō-ryū include:

* "Ten-No": basic drills first invented by (son of Gichin Funakoshi).
* "": developed by as a preliminary exercise before the "Pinan" series; many Wadō-ryū schools teach these basic "kata", particularly "" (太極初段).
* "Pinan" kata: created by , and consisting of "Pinan Shodan" (平安初段), "Pinan Nidan" (平安二段), "Pinan Sandan" (平安三段), "Pinan Yodan" (平安四段), and "Pinan Godan" (平安五段). Funakoshi renamed this series as the "Heian" series.: "Sky Viewing". was the Okinawan name for Kwang Shang Fu, a Sapposhi (emissary of China's ruling class) sent to Okinawa in the 18th century. This "kata" uses stances and attacks comprising of the five previous "Pinan kata". No new techniques are introduced. Funakoshi renamed this "kata" as "".
* " (内畔戦; also known as "Naifanchi"): this was the original name for the three "Tekki kata", but was changed by Funakoshi. This is a lateral "kata" learned from . Wadō-ryū practices only the third Naihanchi "kata".
* "Kūsankū"
* "" : the name means "13 hands." This "kata" was named after a well-known Chinese martial artist who lived in or near Shuri "c." 1700. The movements are repeated in sets of three, and has pivots and turning of the head. Funakoshi renamed this "kata" as .
* "" (披塞; also known as "Bassai"): a "kata" that uses dynamic stances and hip rotation. Funakoshi renamed this "kata" as "Bassai Dai".
* "Chinto" : formulated by Matsumura Sōkon from the teachings of a sailor or pirate named Chinto (or , depending on the source). Crane stance occurs many times, and the flying kicks differentiate "Chinto" from other "kata". Funakoshi renamed this "kata" as .
* "" .
* "" (二十四步): the name means "24 steps." Transmitted by Ankichi Aragaki, this "kata" is known in Japanese as .
* "" : the name means "flying swallow." This is a Tomari-te "kata" based on movements brought to Okinawa in 1683 by a Chinese envoy of the same name. The metaphorical name, "Flying Swallows," comes from the soft blocking sequences near the end of this "kata". Funakoshi renamed this "kata" as .
* "Jion" : A Tomari-te "kata"; part of the "Jion kata" group.
* "" : another Tomari-te "kata" of the "Jion kata" group; the name means "10 hands."
* "" : known as "108 hands," representing the 108 evil spirits of man. This "kata" is also said to have represented a band of 108 warriors that travelled the Chinese countryside in the 1600s, performing ''-type tasks of doing good deeds, giving to the poor, and so on. It is also known by its Chinese name of Pechurrin, and occasionally referred to as "Haiku Hachi Ho" (a name given by Funakoshi). "Suparinpei" was originally listed as a Wadō-ryū "kata" with the by , but he eventually discarded it. Some Wadō-ryū instructors and schools still teach this "kata".

In addition to the three paired "kata" above, there are also "Gyakunage Kata" ("kata" of throwing), "Joshi Goshinjutsu" ("kata" of women's self-defense), and some others, but they are not commonly taught.

In 1938, Ōtsuka registered his style of karate with the under the name of "Shinshu Wadoryu Karate-Jujutsu." Soon after, however, this was shortened to "Wadō-ryū" (和道流). In 1938, the Dai Nippon Butoku Kai awarded Ōtsuka the rank of "Renshi-Go", followed in 1942 by the rank of "Kyoshi-Go". It was around this time that Tatsuo Suzuki, founder of the WIKF, began training in Wadō-ryū. In 1944, Ōtsuka was appointed Japan's Chief Karate Instructor.Fact|date=September 2007 In 1946, Ōtsuka awarded Tatsuo Suzuki the rank of 2nd "dan".

Around 1950, (the founder's second son) began training in Wadō-ryū while in his adolescent years. In 1951, Ōtsuka awarded Suzuki the rank of 5th "dan", the highest rank awarded in Wadō-ryū at that time. In 1952, the Wadō-ryū headquarters ("honbu") was established at the dojo in . In 1954, its name was changed to "Zen Nippon Karate Renmei" (All Japan Karate Federation). In 1955, Ōtsuka published "Karatejutsu no Kenkyu," a book expounding his style of karate. In 1963, he dispatched Suzuki, along with Toru Arakawa and Hajimu Takashima, to spread Wadō-ryū around the world.

In 1964, the (JKF) was established as a general organization for all karate styles. Wadō-ryū joined this organization as a major group. In 1965, Ōtsuka and Yoshiaki Ajari recorded onto film (which is now still available on two video tapes) much of the legacy of Wadō-ryū karate. The first video, "Wadō-ryū Karate Volume 1," consists of: in-depth history and recollections; demonstrations of the eight "Kihon No Tsuki" body shifts; the first five "Kihon-Kumite"; and the "kata" "Pinan" 1-5, "Kūsankū", "Jion", "Naihanchi", and "Seishan". The second video, "Wadō-ryū Karate Volume 2," consists of: more history; the "kata" "Chinto", "Niseshi", "Rōhai", "Wanshu", and "Jitte"; as well as "Kihon-Kumite" 6-10, along with applicationd. In 1966, Ōtsuka was awarded Kun Goto Soukuo Kyokujujutsu (comparable to a knighthood) by Emperor for his dedication to the introduction and teaching of karate.Fact|date=September 2007 On 5 June 1967 , the Wadō-ryū organization changed its name to "Wadōkai."

In 1972, the President of Kokusai Budo Renmei, a member of the Japanese royal family, awarded Ōtsuka the title of "Meijin". In 1975, Suzuki received his 8th "dan", the highest grade ever given (at the time) by the Federation of All Japan Karatedo Organizations, and was named "Hanshi-Go" by the uncle of Emperor Higashikuni.Fact|date=September 2007

In 1980, as the result of a conflict between Ōtsuka and the Wadōkai organization, he stepped down as head of the Wadōkai. took over his place within that organization. On 1 April 1981, Ōtsuka founded the "Wadōryū Karatedō Renmei." ("Renmei" means "group" or "federation.") After only a few months, he retired as head of this organization. His son, Jiro Ōtsuka, took his place. On 29 January 1982, Hironori Ōtsuka passed away, and in 1983, Jiro Ōtsuka succeeded him as grandmaster of Wadō-ryū. The younger Ōtsuka changed his name to "Hironori Otsuka II" in honor of his late father. In 1989, Tatsuo Suzuki founded the third major Wadō-ryū organization, "" (Wadō International Karatedō Federation; WIKF). ("Kokusai" means "international.")

Wadō-ryū has been spread to many countries in the world, by both Japanese and non-Japanese students of Hironori Otsuka. Japanese Wadō-ryū stylists Tatsuo Suzuki, Teruo Kono, Masafumi Shiomitsu, H. Takashima, Naoki Ishikawa, Yoshio Iwasaki and many others spread the art in . Yoshiaki Ajari and Masaru Shintani spread the art in and . Also, non-Japanese such as C.A. Taman (from , also the founder of Jujutsu Indonesia), Joaquim Gonçalves (from ) and many others has helped to spread the style in their respective countries. In 1968, Otsuka Sensei promoted Cecil T. Patterson of the to 5th "dan", and charged him with the creation of the United States Eastern Wado-Kai Federation (USEWF). [Patterson 1974, pg. 4] Following the split between Otsuka Sensei and the Wado-Kai in 1980, Patterson and the USEWF (renamed United State Eastern Wado-Ryu Karate Federation) remained with Otsuka Sensei and is an active member of the Wadōryū Karatedō Renmei.