University of Alberta Faculty of Law

University of Alberta Faculty of Law 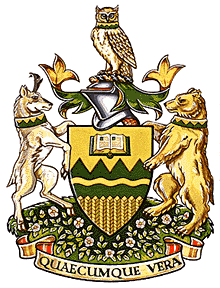 Phenomenal growth in Canada’s western region during the 1880s resulted in an influx of settlers to the area. Among these early pioneers were many professionals (including lawyers), from other parts of the country, as well as the globe. A general lack of regulation in the profession allowed for many different approaches to the application of law¯ a cause of major concern.

By 1898, the Law Society of the Territories had come into existence. This organization formalized Bar admission eligibility by establishing new requirements. In order to gain admission to the Bar, law students were now required to article under a practicing lawyer for a period of five years. The compulsory articling period was shortened to only three years for students who had previously earned a degree in either Arts or Law, or had graduated from the Royal Military College.

As it was generally accepted that law was learned through the practical experience of articling, lectures were offered on a part-time basis only, permitting students to carry on part-time study while still working full-time day hours. Lectures were commonly given in early morning hours or at supper time after work, in order to accommodate the working students’ schedules.

As the first law school in Western Canada, the University of Alberta Faculty of Law made significant efforts to help establish the practice of law in western Canada. The Faculty’s long-standing tradition of excellence is rooted in the contributions of its many educators, starting with Drs. Power and Scott, whose legacies live on today.

The Faculty of Law’s first class, which counted only eight people, graduated in 1915.

By the Faculty’s second year (1913-1914), there were fifty students registered in the Bachelor of Laws program.

Committed to continuous improvement and concerned about growing enrollment, the Faculty reassessed its program offerings. In 1921, the Faculty of Law implemented major changes and redesigned the existing LL.B. program to become a full-time, three-year program with mandatory attendance at University lectures. Before these new program regulations, attendance at lectures was not compulsory, and the LL.B. degree was not required for admission to the Bar. Other changes to the Bar admission process included shortening the articling period following completion of the LL.B. degree to only one year.Building on the excellent academic foundation that Drs. Power and Scott had developed, John Alexander Weir became the first full-time teacher at the Faculty of Law.

The University is located in vibrant Edmonton, Alberta, Canada - a thriving and diverse riverside city with a population of nearly 1 million. Here you will enjoy an outstanding arts scene, world-class sporting events, and great international cuisine. Edmonton is also close to the magnificent Rocky Mountains - a perfect venue for skiing, camping, and hiking.

The University of Alberta Faculty of Law is prominent in health law, , , , and the legal profession. [http://www.expressnews.ualberta.ca/ualberta/About/Administration/pdf/Law.pdf] The Alberta law school educates the majority of legal professionals that enter the .

The University of Alberta Faculty of Law offers a joint LL.B/MBA program. The program is offered within a four-year period - one year less than taking each degree separately. Beside new entrants, students in the first year of the regular MBA program or first and second year students enrolled in the Faculty of Law are eligible to apply for the joint program.

The LLM is an advanced research degree, which provides students with an opportunity to study a particular area of law in much greater depth than is possible in the LLB program. Although the LLM does not qualify a student to practice law in Canada, there are a variety of reasons why students enter the LLM program. Some of our students are practicing lawyers who wish to specialize in a particular area of law, while others are preparing for careers as academic lawyers at universities throughout the world.

The program is designed to provide an extensive exposure to a limited area of the law and to help prepare candidates as specialists in that area. The Postgraduate Diploma in Law is a much shorter program, which can be completed in one semester of full-time study. Diploma students take three or four courses, including an independent research paper. The diploma is intended for students who have an LLB (or equivalent) and want to supplement or update their legal education. Although we have very few diploma students, they work along side the LLM students and participate in the life of the faculty in much the same way.

To be considered a mature applicant you must:

A) Be 35 years of age prior to the first day of September in the year admission is sought. We do not have a maximum age restriction for admission to the law program. B) Provide evidence of a minimum of five (5) years past achievements in non-academic areas indicative of ability to succeed in the studies in law school. C) Have a minimum of two years (60 credits) leading towards any degree or equivalent acceptable to the University of Alberta, completed prior to or in the winter session preceding the September in which admission is sought (i.e., by April 30th).

To be considered an aboriginal applicant you:

A) Normally must have a minimum of two years leading towards any degree or equivalent acceptable to a university in Alberta, completed prior to or in the Fall/Winter preceding the September in which admission is sought (i.e., by April 30th). Consideration may be given to Aboriginal Applicants with a minimum of one year leading to a degree or equivalent, if they exhibit evidence of past achievements in non-academic areas indicative of an ability to succeed in law school. B) Have written the Law School Admission Test within a 5 year period preceding the September of the year in which admission is sought. The last acceptable LSAT writing date for September admission is December of the previous year.

Admissions for Aboriginal and Mature students are more holistic than for applicants in the regular category.

The entrance average is traditionally around 3.7/161 (GPA/LSAT). The University of Alberta Faculty of Law weighs the LSAT and GPA equally. The male/female ratio has in recent years been an even split (with most years having slightly more females than males). The average age of admitted students is 24.5

The John A. Weir Memorial Law Library is one of the best in Canada. It contains a collection of some 300,000 volumes, making it the second largest Law Library in Canada (#1 in Western Canada). Also housed within the Faculty of Law are the Alberta Law Reform Institute, the , the Centre for Constitutional Studies, the Health Law Institute, and the International Ombudsman Institute.

In December 2005, law school alumni ('71), donated $2.5 million to the law school. [ [http://www.expressnews.ualberta.ca/article.cfm?id=7182 U of A Faculty of Law receives unprecedented $2.5 million donation - ExpressNews - University of Alberta ] ]