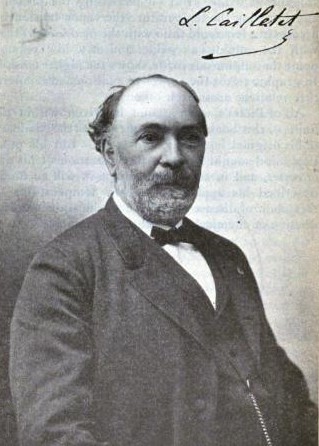 Louis-Paul Cailletet (, &ndash; , ) was a French and inventor.

Cailletet was born in , . Educated in Paris, Cailletet returned to Chatillon to manage his father's ironworks. In an effort to determine the cause of accidents that occurred while tempering incompletely forged iron, Cailletet found that heating the iron put it in a highly unstable state, with gases dissolved in it. He then analyzed the gases from blast furnaces, which helped him understand the role of heat in the changes of states (phases) of metals. This brought him to the work of liquefying the various gases.

Among his other achievements, Cailletet installed a 300-m/985-ft high manometer on the Eiffel Tower; conducted an investigation of air resistance on falling bodies; made a study of a liquid-oxygen breathing apparatus for high-altitude ascents; and developed numerous devices, including automatic cameras, an altimeter, and air-sample collectors for sounding-balloon studies of the upper atmosphere.