Diana Serra Cary (born October 26, 1918), best known as Baby Peggy, was one of the three major American child stars of the Hollywood silent movie era along with Jackie Coogan and Baby Marie.

In her heyday between 1920 and 1924, she was as famous as most adult stars. Although she earned millions of dollars, like Coogan she saw her fortune squandered by her parents and suffered several nervous breakdowns in young adulthood. She went on to have a career as a book publisher, historian and author on Hollywood subjects under the name Diana Serra Cary.

Cary was born on October 26, 1918 in San Diego, California, as Peggy-Jean Montgomery, the second daughter of Marian and Jack Montgomery. While some sources incorrectly give her birth name as Margaret, Cary herself, in her autobiography, notes that she was indeed born as Peggy-Jean. She further explains that while nuns at her Roman Catholic hospital did recommend the name Margaret, her parents rejected the suggestion. Her older sister, called Louise or, occasionally, Jackie, was legally named Jack-Louise.

Baby Peggy was "discovered" at the age of 19 months, when she visited Century Studios on Sunset Boulevard, Hollywood with her mother and a film-extra friend. The Montgomery family was already somewhat involved in the motion picture industry: Jack, a former cowboy, worked as a stuntman and stand-in for Tom Mix in his cowboy movies. Impressed by Peggy's well-behaved demeanor and willingness to follow directions, director Fred Fishbach hired her to appear in a series of short films with Century's canine star, Brownie the Wonder Dog. The first film, Playmates was a success, and Peggy was signed to a long-term contract with Century.

Between 1921 and 1924, Peggy made close to 150 short comedy films for Century. Her movies often spoofed full-length motion pictures, social issues and stars of the era; in one, Peg O' the Movies, she satirized both Rudolph Valentino and Pola Negri. She also appeared in film adaptions of novels and fairy tales, such as Hansel and Gretel and Jack and the Beanstalk, contemporary comedies, and a few full-length motion pictures.

In 1923, Peggy began working with Universal Studios, appearing in full-length dramatic films. Among her works from this era were The Darling of New York, directed by King Baggot, and the first screen adaptation of Captain January. In line with her status as a star, Peggy's Universal films were produced and marketed as "Universal Jewels," the studio's most prestigious and most expensive classification.

The success of Baby Peggy's films catapulted her to superstardom. When she was not filming, she embarked on extensive "In-Person" personal appearance tours across the country to promote her movies. She was also featured in several short skits on major stages in Los Angeles and New York, including Grauman's Million Dollar Theatre and the Hippodrome. Her likeness appeared on magazine covers and was used in advertisements for various businesses and charitable campaigns. Peggy was also named the mascot of the 1924 Democratic Convention in New York, and stood onstage waving a flag next to Franklin Delano Roosevelt. 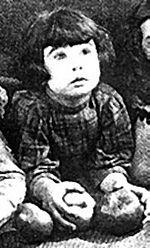 Baby Peggy in The Family Secret

Baby Peggy's film career abruptly ended in 1925 when her father had a falling out with Sol Lesser over her salary and cancelled her contract. She found herself essentially blacklisted and was only able to land one more part in silent films, a minor role in the 1926 picture April Fool.

From 1925 to 1929, Peggy enjoyed a successful career as a vaudeville performer. While her routine, which included a comedy sketch and a dramatic monologue, was initially met with skepticism, it soon became a popular and respected act. Although she was prohibited from "playing the Palace" due to her young age, she appeared onstage there as a special guest. Peggy and her family toured the United States and Canada, performing in major venues, until vaudeville died out with the advent of talkies.

In the 1930s, the Montgomery family returned to Hollywood. Peggy, along with her mother, father, and sister, worked as an extra and bit part player in talking pictures. For example, during this period, Peggy appeared as one of the teens in the youth gang led by Richard Cromwell in the now-cult-favorite, Cecil B. DeMille's This Day and Age. Her final screen appearance was 1938's Having Wonderful Time.

Peggy's working conditions, as described in interviews and her autobiography, were harsh. As a toddler she worked eight hours a day, six days a week. She was generally required to perform her own stunts, which included being held underwater in the ocean until she fainted (Sea Shore Shapes), escaping alone from a burning room (The Darling of New York), and riding underneath a train car (Miles of Smiles). While at Century she also witnessed several instances of animal cruelty and saw a trainer crushed to death by an elephant.

While on the vaudeville circuit, Peggy was frequently ill with tonsillitis and other ailments, however, she continued working. In Whatever Happened to Baby Peggy?, Diana Serra Cary wrote, "On several occasions I went onstage so yellow-dog sick they had to put buckets in the wings: I threw up in one before I made my entrance, and in the second when I exited, before changing and going back out for my encore." When Peggy was a teenager, her father even tried to forbid glasses because he claimed they would make her less marketable to film studios.

Schooling for both Peggy and her sister Louise was sporadic at best. Neither Montgomery sister attended school until the end of the vaudeville era; for their secondary education they worked to pay for their tuition at Lawlor's Professional School, which offered flexible schedules and allowed them to continue performing in films.

Peggy's career was controlled by her father, who accompanied her to the studio every day and made every decision about her contracts. Mr. Montgomery often claimed that Peggy's success was based not on her own talent, but on her ability to follow orders unquestioningly.

While under contract with Century and Universal, Cary commanded an impressive salary. By 1923 she was signed to a $1,500,000 a year contract at Universal; on her vaudeville tours she made $300 per day. Jack and Marian Montgomery handled all of the finances. Money was spent on expensive cars, homes and clothing; nothing was set aside for the welfare or education of Peggy or her sister. Peggy herself was paid one nickel for every vaudeville performance.

Through a combination of excessive spending and trust in corrupt business partnerships, almost all of the money earned from films and vaudeville was squandered. By the 1930s, the Montgomery family was living hand to mouth, scraping to meet expenses by working as extras.

At the age of seventeen, trying to escape the film industry and her parents' plans for her life, Cary ran away from home and rented an apartment with her sister Louise. She married actor Gordon Ayres in 1938, but the union was not a happy one. She divorced Ayres in 1948 and married Bob Cary (sometimes listed as Bob Carey) in 1954. They have one son, Mark. She adopted the name Diana Serra Cary (Serra, in honor of Father Junipero Serra).

Eventually, after years of emotional struggle and open derision from Hollywood insiders and the media, Cary finally made peace with her past as Baby Peggy. She has had successful careers as a publisher, historian and author on Hollywood subjects, writing among other works, an autobiography of her life as a child star, What Ever Happened to Baby Peggy: The Autobiography of Hollywood's Pioneer Child Star, and a biography of her contemporary and rival, Jackie Coogan: The World's Boy King: A Biography of Hollywood's Legendary Child Star.

In recent years, Cary has continued to work as a writer. She has appeared in numerous television documentaries and interviews about her work, and has made appearances at silent film festivals. She has also advocated reforms in child performer protection laws, most recently as a member of the organization A Minor Consideration.

On November 8, 2008, Cary's 90th birthday, she was honored at the Edison Theatre in Niles, California, with a screening of two of her feature films, Helen's Babies and Captain January.[1]

The vast majority of Baby Peggy's films have not survived and records related to their production have been lost; Century Studios burned to the ground in 1926. In addition, another older actress named Peggy Montgomery was active in Hollywood Western films between 1924 and 1929; her credits are occasionally confused with those of Baby Peggy. Filmographies at major websites are incomplete, and sometimes incorrect, because of these facts.

A handful of Baby Peggy shorts, including Playmates, Miles of Smiles and Sweetie have been discovered and preserved in film archives around the world, including the Museum of Modern Art in New York City. The full-length movies The Family Secret, April Fool, Captain January and Helen's Babies have also survived, are in the public domain, and have been restored and made available for sale by several independent film dealers. A full copy of The Law Forbids is also rumored to exist, but has not surfaced publicly. In addition, fragments of some other works, including The Law Forbids, The Darling of New York and Little Red Riding Hood have surfaced and have been restored.[2]

The major highlights of the silent era were On With the Show, Playmates and Brownie’s Baby Doll in 1921, Circus Clowns, Little Red Riding Hood, and Peggy, Behave! in 1922, Peg o’ the Movies, Sweetie, Nobody’s Darling, Little Miss Hollywood, The Darling of New York, and Hansel and Gretel in 1923.