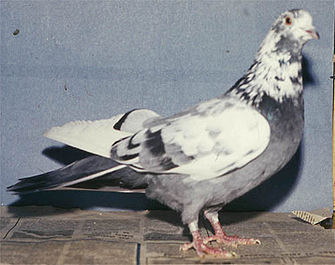 The pigeons originate from solid blue-gray and blue-craw pigeons.

The pigeon is of middle size. The body is solid with well-developed pectoral muscles. The wings are strong and lie on the tail. The neck is short. The back is wide and is inclined towards the tail. Set low on the legs.

The head is white down to the middle of the neck and has color marks. Otherwise the pigeon is blue-gray. The wing flaps have two dark stripes. The tail is blue-gray with a dark stripe at the edge.

The pigeons are capable of flying for 3–6 hours at a high altitude. Keep separately in the air. May fly in a flock. The pigeon opens its tail when flying. The flight is smooth.

Narrow or slightly faceted head. Red eyelid. Yellow (straw-colored) eye. Hazel hue in the stripes and flight feathers. Drooping wings. Weak feathering of the inside part of the tegs. Dark or speckled blue-gray coloring. The neck is solid blue-gray. The number of tail feathers is up to 14.