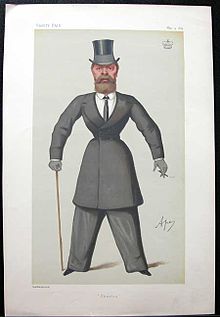 "Charlie". Caricature by Ape published in Vanity Fair in 1879.

Charles was a son of the 3rd Baron Suffield. His father died in 1835 and in 1853, his childless, elder half-brother (his father's successor) died and Charles inherted his title.

Educated at King's College School, Charles married at 24 on 4 May 1854 for his first wife Cecilia Annetta Baring (Revelstoke, sister of 1st Baron Revelstoke), a daughter of renowned banker, Henry Baring. They had > children (7 daughters):

Cecilia died in 1911 and after he married in August 1911 at age of 81 for Frances Amelia Jessie Eliot GABBETT, daughter of Major Robert Pool GABBETT RHA.

He was a President of the Royal Cromer golf club in 1887. In fact Lord Suffield was landlord of the golf's land. His son 6th Baron Suffield and his grandsons also were members of the club and land owners. He was one of the nearest friends of the Prince of Wales the future Edward VII.