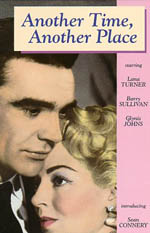 "Another Time, Another Place" is a 1958 film starring , Barry Sullivan and .

An American reporter (Turner) working in Europe during World War II begins an affair with a British reporter (Connery). She's conflicted on whether to marry her rich boss or the charming young reporter she is having an affair with. Finally, she choses the British reporter only to find that he is married and has a son. The two separate shortly thereafter, then decide to stay together and work out their problems.

After the ends, the British is killed in an accident, sending the American reporter into mourning. Her boss, after a few months, convinces her to come back to the and work for him. Before she goes, she visits her old lover's hometown and ends up living with her ex-lover's wife and child.

* During the shooting of the movie in , Connery was confronted by gangster , at the time the boyfriend of Lana Turner. The jealous man pointed a gun at Connery and warned him to keep away from Turner. Connery answered by grabbing the gun out of Stompanato's hand and beating him with it. [http://www.strongsville-ohio.net/data/columns/entertainment/archive/0011.html]