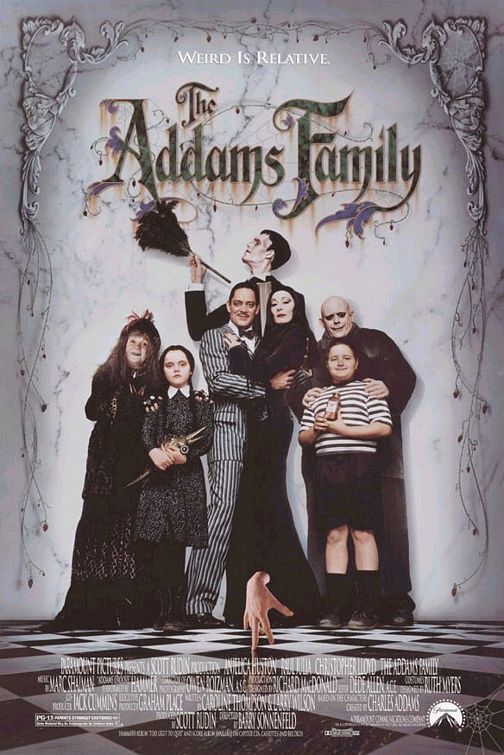 "The Addams Family" is a 1991 based on the characters, from the cartoon of the same name, created by cartoonist , featuring songs and a video from rap artist (ie. "Addams Groove").

The movie was originally developed by (which at the time owned the rights to the television series on which the movie was based). However, due to the studio's financial problems, began co-producing the film and released the movie in the U.S., with Orion retaining the international rights (these rights are now owned by through their 1997 purchase of Orion). The 1993 , "", has been distributed worldwide exclusively by Paramount.

The Addamses are a family of wealthy and eccentric individuals who live together in a mansion and share a common interest in the bizarre and the . The characters first appeared in cartoons in "" magazine in the 1930s, and later gained popularity in the defunct TV series, "The Addams Family". The film centers on the day to day life of the family, and the return of 's long-lost brother, Fester, played by . The film also stars , , and .

The story begins as Gomez () laments to his lawyer, Tully Alford, that he has not spoken to his brother Fester since a quarrel twenty-five years earlier. Morticia invites Tully and his wife to a in which they will attempt to contact the spirit of Fester, believed to have been lost in the all this time. Returning to his office, Tully gets a surprise visit from his , Abigail Craven (), and her enforcer son Gordon (), who have come to collect what he owes them. Gordon harasses Tully until he discovers the with which Gomez has paid the monthly expenses. Tully notices that Gordon appears similar to Fester, and proposes that Gordon pose as Fester to infiltrate the Addams mansion and find the vault where the family fortune is kept.

At the séance, the Addamses attempt to contact Fester's spirit, demanding he knock three times, and are stunned to hear three knocks at the door. As they ask, they hear three knocks at the door. They answer it to find Gordon (as Fester, feigning ) and Abigail (pretending to be a psychiatrist named Dr. Greta Pinder-Schloss). Gomez is initially overjoyed, but his elation quickly turns to suspicion as Fester fails to remember key events from their childhood. Fester attempts to break into the vault but is foiled by an array of set up to protect it, including a mechanism that drags intruders through a tank full of before dumping them outside the mansion.

Despite Gomez's doubts, the brothers reconcile and throw a party for the extensive Addams clan on the night that Fester is to leave. When Wednesday is sent to check on Fester, she finds Gordon in the bathroom, with Abigail shaving his head. Wednesday thinks that he is an impostor and escapes to the family graveyard; Gordon pursues her, but soon has to get back to the party so that no one becomes suspicious.

In the meantime, Tully has discovered that Fester, being the older brother, is legally in control of the entire Addams estate. He enlists the aid of a cantankerous judge who lives next door to the mansion. As the party winds down, the family begins searching for the missing Wednesday — all but Fester, who volunteers to stay behind at the mansion in case she shows up. When she is found, the family returns and finds Tully behind the locked front gate, holding a that bars them from the property. Gomez takes the issue to court, but finds his angry neighbor presiding over the case. The judge rules in favor of Fester, who returns to the mansion and resumes his attempts to break into the vault, with help from Tully and Abigail.

Evicted from their home, the Addamses move into a and try to support themselves with various jobs, but soon realize that they are ill-suited to live like the rest of society. Morticia then returns to the mansion to confront Gordon, but is captured by Tully and Abigail, who plan to her so that she will divulge the location of the vault. Thing sees this and returns to the motel, where he informs Gomez that his beloved wife is in trouble. Gomez rushes to her rescue, whereupon Abigail threatens to kill Morticia unless he takes Fester to the vault.

Gordon, who has become sympathetic to the Addams family, takes matters into his own hands. The bookshelf concealing the passageway to the vault contains books which, when opened, project their contents into reality. Gordon threatens Tully and Abigail with a book named "Hurricane Irene" while Gomez and Morticia escape. The gale-force winds from the book hurl Tully and Abigail out a window and into two open graves, and Gordon is struck by lightning emitted by the pages. Seven months later, all is well with the family as they are throwing a Halloween party. Fester has happily settled in, his memory fully restored by the lightning strike. He "had" vanished in the Bermuda Triangle and developed amnesia, and Abigail made him think he was her son so that he would assist in her criminal schemes. As everyone rushes out to the graveyard for a rousing game of "Wake the Dead," Gomez ponders what could possibly make life better. Morticia reveals she is pregnant, and the two share a passionate .

Differences from the Television Series

The film was much closer to the description Charles Addams made for the show, and followed his instructions closely.

The film differs from the television series in several ways. The most significant change is that Fester is an Addams, Gomez's brother; in the series, he was the brother of Morticia's mother Hester. Also, in the series, Grandmama was Gomez's mother Eudora; the film notes that Gomez's parents were murdered by an angry mob, and subsequently implies that Grandmama is in fact Morticia's mother (even though Charles Addams originally said that the character was "Gomez's" mother), with Morticia frequently referring to Grandmama as 'Mama'. Both reflected changes to the family relations first made in the 1973-1975 animated series. Cousin Itt's voice is of a decidedly higher pitch in the film, and his is completely straight, lacking the curls he featured in the original series.

In the original television series, Gomez Addams does not appear to have any supernatural powers, behaving like a normal (albeit eccentric) wealthy gentleman. However, in the film version Gomez Addams is capable of many feats, including moving at high speed and sword fighting with inhuman poise and alacrity. The Addams Family Mansion has also been re-designed and coincides more with the house seen in the cartoon where the family dumps boiling oil on some carolers.

The classic theme song from the television series is replaced with an instrumental rendition that repeats a few [http://en.wikipedia.org/wiki/Bar_(music) bars] from the original theme's melody. Marc Shaiman's brief rendition of the TV series' theme is sandwiched between a medley of "Deck the Halls" and the orchestration played over film's title card. This song is aptly titled "Deck the Halls & Main Titles".

The soundtrack for "The Addams Family" was released on December 3rd, 1991 and features most of 's film score. Two of the soundtrack's most interesting songs are the jazz-tinged "The Mooche" and the full version of "Mamushka", in which Gomez prattles off the names many famous brothers (including the , the , and the ). It is also worthy of note that the complete version of "Mamushka" was cut from the film after a key audience demographic from test screenings complained the song brought the movie to a stand-still. [http://www.ew.com/ew/article/0,,316385,00.html] The scene that features this complete version of "Mamushka" is said to be epic, and was also meant to be the centerpiece of the film. In all officially-released versions of "The Addams Family", only one minute remains of the "Mamushka" scene, but there is a (which has yet to circulate heavily) that contains the complete scene. An near-complete version of the "Mamushka" scene can be found on "The Making of The Addams Family" television special that aired only in the Netherlands on December 7th, 1991. [http://www.imdb.com/title/tt1080737]

Several snippets of songs from rapper MC Hammer appear within the film (such as ""). "" is played over the duration of the film's end credits.

In addition to the complete "Mamushka" scene, there were several other major scenes filmed but cut from the final movie. Most of these scenes were deemed too violent and grotesque; they involve the following:

* Granny's fog machine malfunctioning, falling off the roof of the Addams' mansion, and nearly decapitating Gomez
* Granny ripping out Wednesday's loose tooth by tying it to a trap door and flinging it open
* Wednesday depositing her newly-removed tooth into a cigar box full of animal teeth and glass eyes
* Fester climbing into the mansion's attic and seeing several glass display cases containing stuffed vampire bats
* Wednesday catching Fester snooping around the attic and informing him that the one large empty glass display case is reserved for a school bully
* When Morticia is trying to figure out why Gomez is so suspicious of Fester, Granny reads a passage from a large book that recommends they "Drain all his blood, replace it with vinegar overnight. Leave a headless rooster beneath his pillow. Smear his forehead, palms, and feet with the tears of a stillborn monkey. Add milk." Mortcia then reacts in disgust at the suggestion of adding milk
* Fester showing Wednesday and Pugsley a hand grenade
* Before Wednesday and Pugsley's performance, Gomez inviting Judge Womack to play a round of golf in his cemetery, to which Womack replies he'd "rather rot in hell"
* A longer scene of Wednesday and Pugsley's theatre performance (which includes more blood and Pugsley's severed prosthetic arm falling off the stage and landing in Judge Womack's lap)
* Fester implying that the blood from Wednesday and Pugsley's performance was real
* Granny and Morticia searching for Wednesday in a cave
* Pugsley and Gomez eating wrapped motel soaps
* Morticia revealing to an interview clerk that she regularly takes Wednesday and Pugsley to visit Death Row inmates at the local prison — for autographs
* Lurch attempting to sell vacuum cleaners and subsequently hurling a bucketful of slop onto a client
* Abigail and Tully dead, stuffed, and on display in a huge glass case