Bowling for Soup Goes to the Movies

Bowling for Soup Goes to the Movies 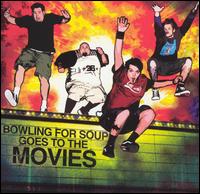 "Bowling for Soup Goes to the Movies" is a collection of 's songs from and . It contains both covers and previously unreleased originals.

# "Jimmy Neutron Theme" (from Nickelodeon and ' "" film, released in 2001.)
# "(Ready or Not) Omaha, Nebraska" (from 's "." Jaret Reddick of Bowling For Soup admits to writing this in 5 minutes, and says "Everyone at ESPN is crazy!!!")
# "Greatest Day" (Originally written for an EA Sports video game (but rejected), the song has been featured in FOX's "", the family movie "", "", "", "" (a Nickelodeon TV movie), and a movie.)
# "...Baby One More Time" (This song was written for the movie "Freaky Friday" after much of the actual movie had already been written. Because the song is written into the dialogue, Bowling for Soup was asked to cover the song at a given tempo. Reddick says, "We couldn't do our usual 'speed it up and add harmonies and it will sound like BFS' approach.")
# "Here We Go" (from ""; this song was originally written by of The Transplants, Operation Ivy, and Rancid.)
# "Undertow" (While the band decided to pass up adding this song to their "" album, it was featured on the "Summerland" soundtrack. Reddick says, "I don't have a copy of that [Summerland] soundtrack, but I am guessing this is one of the strongest tracks on it.")
# "Spanish Harlem" (This is the one of only three tracks (excluding the two new tracks), which was not featured on any television show or movie, as a series starring passed on the song.)
# "Li'l Red Riding Hood" (The movie "Cursed" opened with this song.)
# "Live It Up" (This song is a demo, and is not in any television shows or movies.)
# "Star Song" (While this song is not in any television shows or movies, it is one of the band's favorite songs and it appears on the re-issue of .)
# "" (Featured in the movie "Sky High", the song has now been released as the single from the album. Bowling for Soup was asked to cover it by , who also asked the band to cover "Baby One More Time". Though they were a little apprehensive about covering a song that not only has been covered so many times before, but is also a "classic" to the band, they eventually agreed. Bowling for Soup's version has also changed the second line of the song to be more appropriate for kids.)
# "Five O'Clock World" (The theme of 2 episodes for the 2002-2003 "Drew Carey Show".)
# "Gilligan's Island Theme" (Used for the reality show based on the classic series.)
# "Sometimes" (One of the previously unreleased tracks featured on the album.)
# "Sick of Myself" (This song was originally covered for the wedding of Lance (the original drummer).)

The artwork of the booklet and CD case is a comic book-like rendition of the band. The CD itself resembles a movie reel.