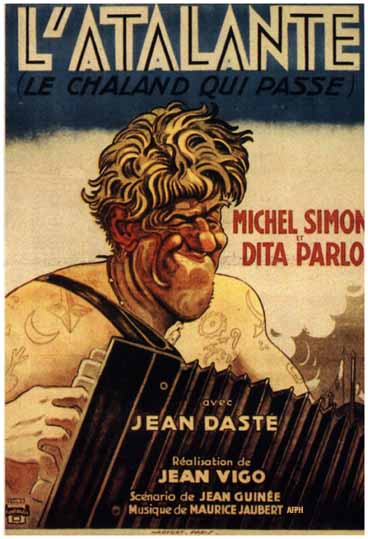 "L'Atalante" (also released as "Le chaland qui passe") is a 1934 French directed by and starring , and .

The story follows Jean (), the captain of the barge L'Atalante and his new wife, Juliette (). They are married, having hardly met, in Juliette's provincial town. The scene of their march from the wedding to Jean's barge is filmed in a discontinuous style that predicts the films of the . They set out on a trip to which functions doubly as a cargo delivery and as their makeshift honeymoon. Tensions arise with the crew, who are not used to the presence of a woman. Most of the conflict, however, stems from Jean who flies into a jealous rage, smashing plates and sending cats scattering every which way, when he discovers Juliette and first mate Jules () talking in Jules' quarters.

Once arriving in , Jean and Juliette go to a music club. There they meet a street peddler who flirts with Juliette leading to a scuffle with Jean. Growing disaffected of barge life, and enamored with the lights of , Juliette runs off. Jean, furious, casts off, leaving her behind. He becomes very depressed so Jules decides to look for her and bring her back.

The film has been praised for its prescient poetic realist style, but it also includes surprising surrealist passages, such as the double exposure wrestling match and a scene in which Jean jumps into the river. As noted, it was also a favorite of the filmmakers of the French New Wave, whose films contain many allusions to the works of Jean Vigo.

The original distributors cut the film's running time in an attempt to make it more popular and changed the title to "Le chaland qui passe" ("the passing barge"), the name of a song from the time, which was also inserted into the film.

The much lauded cinematography was by Boris Kaufman. He would later go on to shoot great Hollywood films such as "". Nevertheless, he described his years working with Vigo as "cinematic paradise."