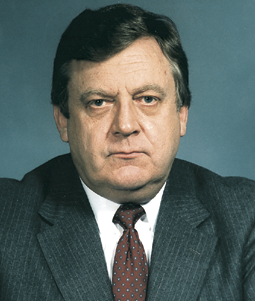 Lawrence Sidney Eagleburger (born ), is an American and former career , who served briefly as the under President . Previously, he had served in lesser capacities under Presidents , , , and George H. W. Bush.

Originally hailing from , , he graduated from high school in , then attended the , before earning his bachelor's and master's degrees from the . Eagleburger also served in the from 1952 to 1954, attaining the rank of . In 1957, he joined the , and served in various posts in embassies, consulates, and the State Department. From 1961 to 1965 he served as a staffer at the US Embassy in , Yugoslavia.

Starting in 1969, he served in the Nixon administration as an assistant to National Security Advisor . He stayed in this appointment until 1971; thereafter he took on several positions, including advisor to the US Mission to in , and, following Kissinger's appointment as Secretary of State, a number of additional posts in the State Department.

Following Nixon's resignation, he briefly left government service, but was soon appointed as ambassador to by President Jimmy Carter, a post he held from 1977 to 1980.

His period as advisor for Yugoslavian affairs from 1989 to 1992 was highly controversial. He gained a reputation for being a strong n partisan, most controversially denying that Serbian paramilitaries and the Yugoslav National Army had committed atrocities in the breakway republic of . This perceived partisanship led the European press to dub him "Lawrence of Serbia" (a reference to ).fact|date=March 2008

Eagleburger became chairman of the , or ICHEIC, which was set up in 1998. The purpose of the Commission was to resolve unpaid -era claims for survivors of the . In 2005 Eagleburger announced that the ICHEIC was offering approximately 16 million dollars to Holocaust victims and their heirs, noting as he did so the research ability of the ICHEIC staff which allowed them to evaluate claims from companies which no longer existed. [ [http://64.233.187.104/search?q=cache:wCpXPIC88scJ:www.icheic.org/pdf/ICHEIC%2520announces%2520additional%2520humanitarian%2520awards%25208-19-05.pdf+Eagleburger+ICHEIC&hl=en&ct=clnk&cd=1 ICHEIC offers additional $16 million to holocaust era insurance claimaints] , accessed , ] In the years prior to this there had been some controversy about the Commission, including reports that it was over-budgeted and too slow, and that insurance companies which had previously agreed to work with the ICHEIC had failed to disclose policyholder lists. [ [http://www.henrywaxman.house.gov//htbin/email_pg1/issues/foreignaffairs/issues_foreign_affairs_HRR_jewjournal_2_15_02.htm Webpage of Representative Henry Waxman, Justice delayed and justice denied] , accessed , ] Eagleburger responded to these accusations by saying, among other things, that it was difficult to work quickly when many of the claimants lacked basic information such as the name of the insurance company involved. [ [http://www.jewishsf.com/content/2-0-/module/displaystory/story_id/17228/edition_id/340/format/html/displaystory.html Holocaust insurance body blasted for not paying claims] , accessed , ]

After serving in the Foreign Service for 27 years, Eagleburger retains an interest in foreign policy and is a familiar figure on current events talk shows. He has caused some discussion with public comments about President George W. Bush's foreign policy. In August 2002, Eagleburger questioned the timing of possible military action in , saying, "I am not at all convinced now that this is something we have to do this very moment." [ [http://edition.cnn.com/2002/ALLPOLITICS/08/22/eagleburger.iraq/?related Eagleburger questions possible Iraqi move] , accessed , ] He did indicate he believed that Iraqi regime change could be a legitimate US endeavor at some point, but that at that time he did not believe the administration was fully prepared for such a conflict. [ [http://www.foxnews.com/story/0,2933,60704,00.html Transcript: Lawrence Eagleburger on FNS] , accessed , ] In April 2003, following warnings by the Bush administration to the government of , Eagleburger condemned the possibility of military action in Syria or , saying that public opinion would not support such a move and that "If President Bush were to try it now, even I would feel he should be skinned alive." [ [http://www.mirror.co.uk/news/allnews/page.cfm?objectid=12844873&method=full&siteid=50143&headline=BUSH'S%20CALL%20TO%20SYRIANS Bush’s call to Syrians] , accessed , ]

After the election of Iranian president , Eagleburger seemed to think that Iran was moving in a direction which may at some point call for military action, saying in an interview that while "we should try everything else we can first," at some point it would probably be necessary to use force to ensure that Iran did not obtain or use . [ [http://web.lexis-nexis.com.proxy.lib.utk.edu:90/universe/document?_m=50fef0c3fffa02964ca6aac06f3c9a88&_docnum=1&wchp=dGLbVtb-zSkVb&_md5=3298310cbef7a0f1e1832d5f24979231 Interview With Former Secretary of State Lawrence Eagleburger] , accessed , ]

On , he participated in a meeting at the of former Secretaries of Defense and State to discuss United States foreign policy with Bush administration officials. On , it was announced that he would replace Secretary of Defense designate in the . [" [http://www.alertnet.org/thenews/newsdesk/N10277240.htm Eagleburger to join U.S. Iraq study group] ", "Reuters", November 10, 2006. Retrieved November 10, 2006.]

He is Chairman of the Board of Trustees for , and a member of the (WINEP) Board of Advisors.

He has three sons, all of whom are named Lawrence Eagleburger, though they have different middle names. [ [http://www.brookings.edu/gs/research/projects/press/012302.htm The role of the press in the anti-terrorism campaign] , accessed , ]

He was formerly a member of the Board of Visitors at the .

On , he delivered the commencement address to the 1995 graduating class of . [" [http://www.jmu.edu/centennialcelebration/speakers.shtml JMU Graduation Speakers] "]

* [http://www.disinfopedia.org/wiki.phtml?title=Lawrence_Sidney_Eagleburger Disinfopedia article on Eagleburger] .
* [http://www.nndb.com/people/340/000023271/ Lawrence Eagleburger profile, NNDB] .
*Lawrence Eagleburger has been [http://hdl.loc.gov/loc.mss/mfdip.2004eag01 interviewed] as part of [http://memory.loc.gov/ammem/collections/diplomacy/index.html Frontline Diplomacy: The Foreign Affairs Oral History Collection of the Association for Diplomatic Studies and Training] , a site at the [http://www.loc.gov/ Library of Congress] .