Infobox Film | name = Beyond the Law 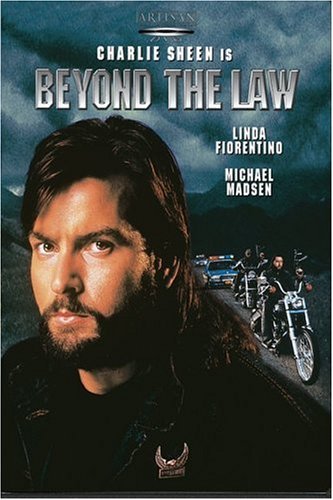 "Beyond the Law" is a written and directed by .

Dan Saxon is an undercover cop who infiltrates a biker gang to arrest the men behind a drug-smuggling/arms-dealing operation. In order to maintain the trust of the gang's leader, he must commit ever more dangerous and heinous crimes. Just how far 'beyond the law' will Saxon go?

Based on a true story

This film was an release, but has attracted a cult following. Officers who have worked undercover have said the movie is very accurate in its depiction of undercover operations.

*Bogus Charlie's story of the Indian brave who loses his shadow foreshadows the movie's plot.
*The setting is the of the Southwest. Deserts often represent a trial of character. Many such examples are included throughout history, stories in the are of particular note. The spent forty years in the desert to gain admission into the . spent forty days in the desert and then faced temptations by the . For a non-Biblical example, in "", a drought begins the trials for the Joad family. Along these lines, the character of Dan Saxon is tried and purified by his time in a similar setting.
* often symbolizes purification. When it rains at the conclusion of the movie, it signifies Dan Saxon's trial is complete. "" concludes in a similar way. With the connection to the ing process (when the water breaks), rain often symbolizes rebirth.
*Dan Saxon removing his shirt, gloves, and necklace at the end of the film symbolizes him shedding his former self.