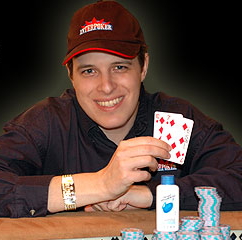 Todd Witteles is an American professional player. A former computer scientist, Witteles made poker his full-time pursuit in .

Primarily a cash game player, Witteles entered his first tournament at the , where he played the $1500 Limit event. He finished in third place out of a field of 1,049 entrants, with the final table being shown on ESPN. He took home nearly $116,000 after getting knocked out of the tournament by 21-year-old . As a gimmick, Witteles used a small bottle to protect his cards while playing, in reference to his online moniker "Dan Druff."

After finishing 2nd and 6th in smaller Los Angeles area tournaments, Witteles picked up his next major cash by finishing 4th at the Caribbean Poker Classic on the island of St. Kitts. He won $87,000 for that effort, and it was his first appearance at a final table of a major No Limit Hold 'Em event.

In November 2006, Witteles made the final table in the first-ever live tournament of the new game "Hold 'Em Blackjack", a game that is actually similar to a hybrid between Seven-Card Stud and Blackjack. He ended up finishing in 5th place.

Witteles owns a portion of the popular neverwinpoker.com poker forum, where he regularly participates and offers free poker strategy advice. He also hosts two internet radio programs that broadcast from the site.