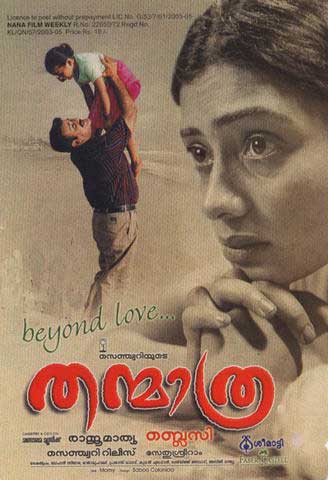 "Thanmathra" ("Molecule") () is a film directed by which portrays the effects of on the life of an individual and his family. The film bagged five state film awards for the Best Film, Best Actor, Best Director, Best Screenplay and a special mention for the debutant actor .

Ramesan Nair () is a Kerala government secretariat employee, cocooned in his own small and happy world. An honest and sincere man, Ramesan's family consists of his loving wife Lekha (), son Manu () who is a plus-two student, and daughter Manju (), a primary school student. His biggest ambition is to see that his son gets into the (), something he himself had failed to achieve despite being a brilliant student. Manu is a very loving son and an intelligent student who shares a strong emotional bond with his father. All in all, they form the very picture of loving family, with a bright future.

However, fate has other ideas. Ramesan starts to develop problems with his memory. What starts as commonplace omissions and absentmindedness, quickly grows into handicapping cognitive and behavioral impairments.

The first time we notice this is when Ramesan misplaces a very important office file at his home, inside the refrigerator. One day he arrives in office after buying a bag of vegetables and starts behaving as if he had reached home after his office hours. He begins acting strangely in the office, as if he has lost his sense of time and place. He is taken to the doctor by his family and close friend, Joseph ().

In the hospital, Ramesan is diagnosed with , a disease which causes a gradual loss of memory and cognitive abilities. The news comes as a grave shock for the happy family and turns their world upside down. The family is devastated by the sad news, but tries to adjust to the situation with a lot of determination underscored by strong emotional bonds. How they cope up with the trauma, insecurity and uncertainty caused by Ramesan's plight, forms the gist of the movie.

Director has brought out the manner in which the dreaded disease entangles Ramesan in its vice-like grip, with a few deft directorial strokes. These snapshots are devastating. One scene depicts Rameshan forgetting to switch on the scooter; another has Ramesan using his son’s toothbrush. Then there is the scene that shows Ramesan forgetting the way to his house. In a scene which is rather unusual for the staid malayalee, there is a love-making scene, where Ramesan gets distracted by a lizard on the wall. In a few fabulous frames, conveys to the audience the malignancy and horror of the disease.

The movie illustrates one of the finest performances by who is a spontaneous actor and an acting genius in his own right. He won the state best actor award for his unparalleled depiction of a middle aged man in the throes of a crippling disability. The movie was advertised as a return of the actor from a super-hero image which he had cultivated with a string of movies, back to that of an average man. The actor has taken full advantage of this opportunity to display a superb performance.

That year's national award should have been undoubtedly won by Mohanlal for this performance. But he narrowly lost to Amithab bachan for his performance as Azhemier's patient in the movie'Black'. But even a child who has watched both the movies will know that MOHANLAL has beaten the BIG B hands down with his performance.Guess lobbying has more say than performances..

Newbie who plays Mohanlal's son, is the surprise package of the movie, giving a performance which stands above his years of experience. His performance won him a special mention from the state film awards jury. The performance of , who plays the role of Mohanlal's father, is also excellent. , a newcomer to movies, plays a great supporting role and does justice to her character. is in his elements as usual, and fits into the role of Joseph, as if it were tailor-made for him.

The bulk of the movie is carried on the shoulders of the three protagonists - the father (), the grandfather () and the son(). It is very touching to watch the strong ties between them helping the family to cope with the disaster. In this age of the Internet and instant relationships, it is soothing to watch a story that rides on the strong ties among three successive generations.

Mohanlal - Ramesan Nair, a middle-class government servant who is a role-model family man and persona.

Meera Vasudev - Lekha, Ramesan's devoted wife who stands by him throughout his ordeal.

Arjun Lal - Manu, Ramesan's brilliant son whose life's aim is to get into the Indian Administrative Service (IAS), to fulfil his father's dreams.

Nedumudi Venu - Ramesan's father, a hapless spectator to the progressive mental degeneration of his son.