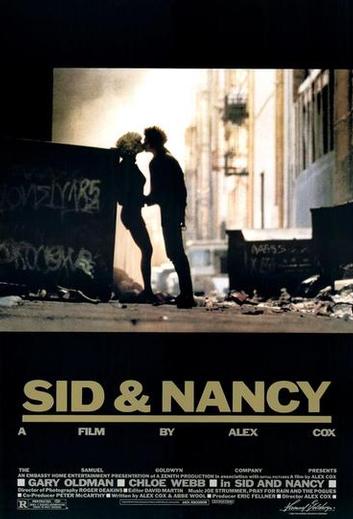 "Sid and Nancy", originally titled "Love Kills", is a 1986 directed by . It emerged during a period of renewed fascination in the life of the member . It stars as Vicious and as his girlfriend, .

The movie is largely based on the mutually destructive, drug-and-sex filled relationship between Vicious and Spungen. Vicious's mother, Anne Beverley, initially tried to prevent the movie from being made. After meeting with Cox, however, she decided to help the production. Some of the supporting characters are composites, invented to streamline the plot.

Oldman lost weight to play the emaciated Vicious by eating nothing but "steamed fish and lots of melon," but was briefly hospitalized when he lost too much weight. Vicious's mother also gave Oldman Vicious' own trademark heavy metal chain and padlock to wear in the film.

recorded an infamous video audition in which she exclaimed "I "am" Nancy Spungen." Cox was impressed by Love's audition, but has said the film's investors insisted on an experienced actress for the co-leading role. Cox would later cast Love as one of the leads in his movie "Straight to Hell". Instead Love was cast in the relatively minor role of Gretchen (a part that Cox wrote specifically for her benefit), one of Sid and Nancy's New York junkie friends. Somewhat ironically, Love would be compared to Spungen later in life on account of her marriage to .

In his 2007 autobiography, guitarist revealed that the casting director hired all five members of Guns & Roses as extras for a club scene, having coincidentally scouted them in different locations without their knowledge. He said "all of us showed up to the first day of casting, like 'Hey...what are you doing here?'" However, Slash was the only one in the group to stay the entire shoot.

Webb and Oldman improvised the dialogue heard in the scene leading up to Spungen's death, but based it on interviews and other materials available to them. The stabbing scene is fictionalized and based only on conjecture. Cox told the "": "We wanted to make the film not just about Sid Vicious and , but as an anti-drugs statement, to show the degradation caused to various people is not at all glamorous."

The original music is by Pray for Rain, and .

The film was rated R in the USA for drug use, language, violence, sexuality and nudity.

Prominent musicians made appearances in the film, including: , , and of .

, on the other hand, had no praise for the movie: "Some have said stimulating, most have preferred revolting. Consensus, an example of the dregs to which cinema has been reduced." He also cited a line from a review that appeared in "": "Relentlessly whingeing performances and a lengthy slide into drugs, degradation and death make this a solemnly off-putting moral tract." ["Halliwell's Film Guide: 11th Edition" by Leslie Halliwell, edited by John Walker. (1995, HarperCollins) p.1033.]

In his book "Sid Vicious: Rock N' Roll Star", Malcolm Butt describes Webb's performance as Spungen as "intense, powerful, and most important of all, believable." Issue #117 of "" (February 2007) ranked Gary Oldman as #8 in its "10 Best actors in rockin' roles" list, describing Oldman's Sid Vicious as a "hugely sympathetic reading of the punk figurehead as a lost and bewildered manchild." Conversely, Andrew Schofield was ranked #1 in the "10 Worst actors in rockin' roles" describing his performance as Johnny Rotten as a "short-arse Scouse Bleasdale regular never once looking like he means it, maaan." Commentary on the Criterion DVD dismisses the film's portrayal of as wholly inaccurate. of The Clash also criticised the movie for its portrayal of Lydon:

"I cannot understand why anyone would want to put out a movie like "Sid and Nancy" and not bother to speak to me; Alex Cox, the director, didn’t. He used as his point of reference - of all the people on this earth - ! That guttural singer from ? What the fuck did he know about Sid and Nancy? That’s probably all he could find, which was really scraping the bottom of the barrel. The only time Alex Cox made any approach toward me was when he sent the chap who was playing me over to New York where I was. This actor told me he wanted to talk about the script. During the two days he was there, he told me that the film had already been completed. The whole thing was a sham. It was a ploy to get my name used in connection with the film, in order to support it."

"To me this movie is the lowest form of life. I honestly believe that it celebrates heroin addiction. It definitely glorifies it at the end when that stupid taxi drives off into the sky. That's such nonsense. The squalid New York hotel scenes were fine, except they needed to be even more squalid. All of the scenes in London with the Pistols were nonsense. None bore any sense of reality. The chap who played Sid, , I thought was quite good. But even he only played the stage persona as opposed to the real person. I don’t consider that Gary Oldman's fault because he’s a bloody good actor. If only he had the opportunity to speak to someone who knew the man. I don’t think they ever had the intent to research properly in order to make a seriously accurate movie. It was all just for money, wasn't it? To humiliate somebody’s life like that - and very successfully - was very annoying to me. The final irony is that I still get asked questions about it. I have to explain thatit's all wrong. It was all someone else’s fucking fantasy, some Oxford graduate who missed the punk rock era. The bastard."

"When I got back to London, they invited me to a screening. So I went to see it and was utterly appalled. I told Alex Cox, which was the first time I met him, that he should be shot, and he was quite lucky I didn't shoot him. I still hold him in the lowest light. Will the real Sid please stand up?"

"As for how I was portrayed, well, there's no offense in that. It was so off and ridiculous. It was absurd. Champagne and baked beans for breakfast? Sorry. I don't drink champagne. He didn't even speak like me. He had a accent. Worse, there's a slur implied in the movie that I was jealous of Nancy, which I find particularly loathsome. There is that implication that I feel was definitely put there. I guess that’s Alex Cox showing his middle class twittery. It’s all too glib, it’s all too easy." ["Rotten: No Irish, No Blacks, No Dogs" by John Lydon, with Keith and Kent Zimmerman. (1994, Hodder & Staughton Ltd) pp.150-151.]

However, it should be noted that Strummer only met with Alex Cox for the first time "after" the completion of the film, at a wrap party. The pair's meeting involved discussion over soundtrack work for the film, not the film's script. [ [http://www.hightimes.com/ht/entertainment/content.php?bid=154&aid=2 DEATH OF A PUNK - JOE STRUMMER (1952-2002) Clash co-founder dies of heart attack. :: hightimes.com ] ]

In a later interview, Lydon was asked the question, "Did the movie get anything right?" to which he replied: "Maybe the name Sid." [ [http://www.drdrew.com/article.asp?id=722 Rotten to the Core: An Interview With John Lydon ] ] Alex Cox claimed that Lydon's hatred of the movie was "understandable, given that it was based on incidents from his life and centered around one of his friends." [ [http://www.alexcox.com/dir_sidandnancy.htm Alex Cox - SID & NANCY ] ] The other remaining Pistols have been far less outspoken about the movie than Lydon, although Lydon claimed that Paul Cook was more upset over the movie than he was. [ [http://www.fodderstompf.com/ARCHIVES/INTERVIEWS/cut87.html Fodderstompf | Press Archives | Cut Magazine, November 1987 ] ]

The official soundtrack contains no songs sung by either the or .

The film includes a large number of factual errors.
*One scene shows Spungen giving Vicious the chain and padlock necklace that would become his trademark. This was, however, given to him as a present by of .
*The inclusion of the Sex Pistols’ "Today Show" TV incident (with ) is out of place. The event occurred in December 1976, when was the Pistols’ bassist, and Sid didn't join the band until three months later. The dialogue of the interview as depicted in the film is different as well.
*The film features Sid playing at Winterland, San Francisco with "NANCY" carved onto his chest. This is a distortion of the event as Vicious played at the Longhorn Ballroom in Dallas with "GIMME A FIX" carved onto his chest.
*The scene depicting the Pistols playing at shows Johnny Rotten saying to the crowd “Ever get the feeling you’ve been cheated?”, before the Pistols begin playing "Problems." However, Rotten actually said this at the end of the gig, just after the Pistols played their final song of the encore, "No Fun."
*The movie shows and Steve Jones walking out of the band, leaving John and Sid. This is inaccurate because it was John who walked out on the other Pistols. Steve and Paul stayed with Sid and , appearing in and recording songs for the movie "".
*In the scene where Nancy succumbs to her stab wound in the bathroom, she dies face down on the bathroom floor. In actuality, she died in a sitting position under the sink. [http://www.theviciousfiles.co.uk/site.jpg/seane%20of%20crime1.jpg]
*In the scene right before Sid is supposed to play bass live for the first time with the Sex Pistols he is shown attacking a journalist (called Dick Dent in the film) with his bass guitar. In fact Sid did attack the NME journalist Nick Kent but this was long before he joined the Pistols, he didn't use a bass guitar, he used a bicycle chain. [ [http://www.popmatters.com/music/features/011108-25up5.html 25 Up: Punk's Silver Jubilee: So Tough: The Boy Behind the Sid Vicious Myth | PopMatters Music Feature ] ]