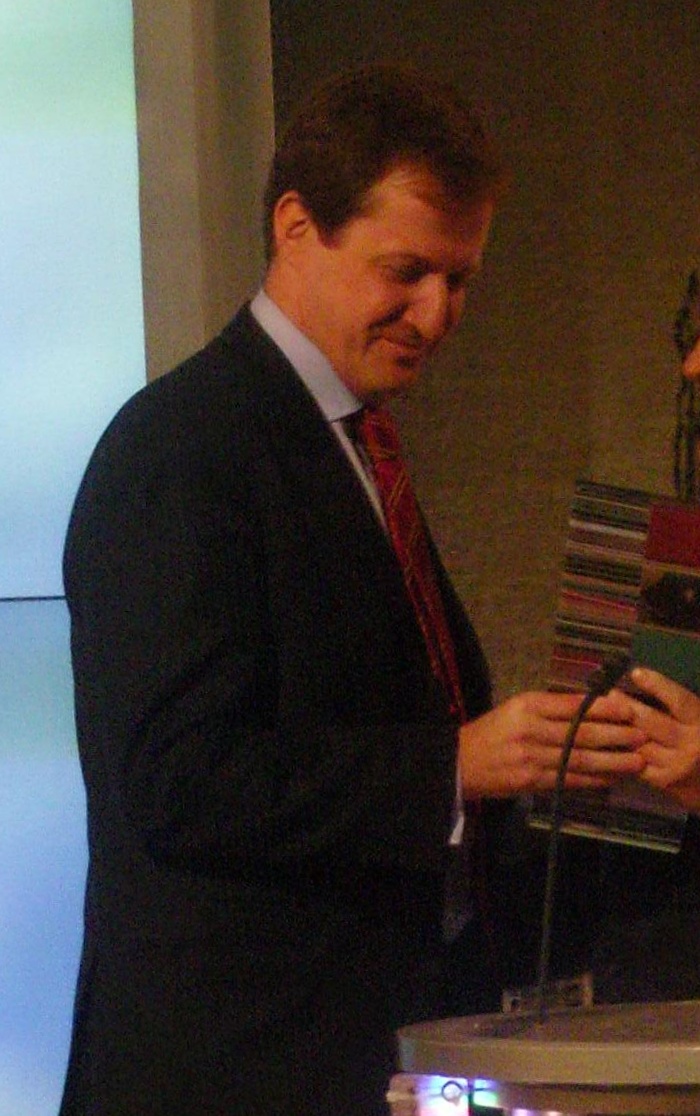 Alastair Campbell is the son of Donald Campbell and his wife, Elizabeth, a Scottish couple (his father was a Gaelic speaker from while his mother was from [Seon C. Caimbeul [http://thescotsman.scotsman.com/gaelic/Beachdan-ceannard-nan-car-mu.3310864.jp "Beachdan 'ceannard nan car' mu ar cànain"] "The Scotsman" 28 July 2007, Retrieved on 30 July 2007.] ) who moved to , , when the elder Campbell became a partner in a veterinary practice there. Alastair has two elder brothers, Donald and Graeme, and a younger sister, Elizabeth.

Campbell attended City of Leicester School and , where he studied modern languages (French and German, for which he received a 2:1, or Upper Second) and claimed that he wrote essays based solely on criticism and did not always read the works themselves. Campbell spent a year in the South of as part of his degree.

Campbell also became interested in . His first published work was "Inter-City Ditties", his winning entry to a readers' competition run by pornographic magazine "Forum". This led to a lengthy stint working for "Forum", writing articles such as "The Riviera Gigolo" and "Busking with Bagpipes" which Campbell claimed were based on autobiographical events. [Oborne, Peter and Simon Walters (2004). "Alastair Campbell." Aurum. ISBN 1-84513-001-4. pp. 25-32.]

He was appointed as a sports reporter on the "Tavistock Times" and then promoted to the news pages where his first major story was the loss of the Penlee lifeboat with all its crew. It was as a trainee on the Plymouth-based West Country newspaper the "Sunday Independent", then owned by Mirror Group Newspapers, that he met his partner, .

Campbell later moved to the London office of the "" where he became a political correspondent. However, his rapid rise and stressful job led to substance abuse and a psychotic breakdown in 1986. Campbell recovered and has become teetotal [Alastair Campbell, (2007), entry for 6 April 2002] . He rebuilt his career and became the Political Editor of the "Daily Mirror", the largest circulation left-wing paper. Campbell was a close advisor of , going on holiday with the Kinnocks, and worked closely with . Campbell's loyalty to Maxwell was demonstrated when he punched "" journalist Michael White after White joked about "Captain Bob, Bob, Bob...bobbing" in the Atlantic Ocean shortly after Maxwell's drowning in 1991. [Michael White [http://politics.guardian.co.uk/labour/story/0,9061,587925,00.html "White vs Campbell",] "The Guardian", 5 November 2001. Retrieved on 19 July 2997.] Campbell later put this down to stress at the thought of himself and others losing their job following the demise of the "Daily Mirror" proprietor [1] . [Simon Hoggart [http://www.guardian.co.uk/guardianpolitics/story/0,3605,1006140,00.html "Sooner or later, Campbell was going to lose it",] "The Guardian", 26 July 2003. Retrieved on 19 July 2007.] [Nick Assinder [http://news.bbc.co.uk/1/hi/uk_politics/2977978.stm "The life and times of Alastair Campbell",] BBC News, 29 August 2003. Retrieved on 19 July 2007.]

After leaving the "Mirror", Campbell became Political Editor of "Today", a full colour tabloid newspaper which had launched in 1986, but was now trying to turn leftward. Campbell was working there when John Smith died in 1994. He was a well-known face and helped to interview the three candidates for the new Labour Party leader; it was later revealed that he had already formed links with .

Shortly after Blair won and became leader of the opposition in 1994, Campbell left the newspaper to become his spokesman. He played an important role in the run-up to the 1997 general election, working with to co-ordinate Labour's campaign. Campbell intervened personally to complain whenever media outlets ran stories he felt were unhelpful to the campaign, and was not afraid to attack journalists personally when they displeased him. When Blair became Prime Minister in 1997, Campbell was appointed as the Prime Minister's Official Spokesman in charge of the press machine.

As the Labour government found its feet, Blair relied for his political advice on a close circle of his own staff. Campbell was seen as particularly influential, and was sometimes referred to as the "real Deputy Prime Minister". His influence was certainly greater than his job title suggested: along with Jonathan Powell he was given the authority to direct Civil Servants, who previously had taken instructions only from ministers. (, in his first day as Prime Minister, rescinded this authority). Campbell's control of the traditional under which a select group of accredited journalists were given privileged access to the Prime Minister's spokesman (and the journalistic kudos that this access could bring) meant that he wielded a good deal of power over the media, as previous Press Secretaries had found. Unlike those of his predecessors, his had been a political appointment and had not come through the .

In 1998 Alastair Campbell headed the Strategic Communications Unit. This department sought to centralize all government communications to ensure that all departments "stayed on message".

When Blair won a second term on 7 June 2001 Campbell took a step back from the job of briefing journalists and was appointed as the "Prime Minister's Director of Communications and Strategy". This gave him a strategic role in overseeing government communications. He was sometimes regarded with suspicion (if not outright hostility) by elements of the Labour Party and Blair's political opponents who felt he minimised the role of members of the government and members of Parliament. However, those who worked closely with him describe an aggressive but funny and loyal colleague, who inspired loyalty in others. Even his most severe critics regarded him as adept in the techniques of . He was memorably sponsored by the US President to complete the London marathon in aid of a cancer charity, which he had supported since a journalist colleague died early of the disease.

In February 2003 he was a central figure in the alleged "dodgy dossier" controversy. A dossier on Iraqi concealment of Weapons of mass destruction and human rights abuses under was published on 3 February. The dossier purported to be based on intelligence but a large section had been taken (unacknowledged) from an article by available on the internet. The article was the basis of chapter two of his doctoral thesis, which was unfinished at that time.

A few months later he became embroiled in further controversy after the reporter broadcast claims that the government had included evidence it knew to be false (famously described as "sexed up" by another BBC journalist) in an earlier dossier (about Iraqi ). In a later newspaper article Gilligan said that his source had specifically identified Campbell himself as responsible for the alleged exaggerations. Campbell demanded a retraction and apology from the BBC, but none was forthcoming.

The BBC's source, , identified himself to his employers at the Ministry of Defence. The government released this news and under questioning from newspapers desperate to identify the source gave sufficient hints for his identity to become public. Kelly committed suicide shortly afterward and the into the circumstances of his death pushed Campbell further into the limelight. The inquiry showed that Campbell had been working closely with the Joint Intelligence Committee (JIC), in which the different sections of the intelligence services meet, and made suggestions about the wording of the dossier. He had also been keen that Kelly's identity be made public writing in his diary, "It would fuck Gilligan if that were his source". However, Lord Hutton cleared Campbell of acting improperly, as JIC had taken all editorial decisions. Hutton also found that Kelly's name would have had to be made public to avoid allegations of a cover-up. The Hutton report was widely criticised in the media, however, and Campbell's "Presidential"-style press conference afterwards was perceived by some to be misjudged, with Campbell attacked for appearing to gloat over the 's misfortune. This criticism increased when Campbell sold a signed copy of the Hutton report at a charity auction.Fact|date=April 2008 Comments in his recently published diaries are contradicted by some of the statements made during the Inquiry, leading some to call for a re-examination of the evidence, particularly telephone calls made to Dr. Kelly in the week before his suicide, although this seems unlikely as the Hutton inquiry had access to Campbell's diaries for the period.

On 29 August 2003 he announced his resignation from 10 Downing Street. As well as editing his diaries for publication (see below), in recent times Campbell has spent much of his time giving occasional public talks and supporting his favourite football team,

Campbell worked once again for the Labour Party in the run up to the May 2005 General Election. Although never given any official title, he was effectively the party's director of communications for the campaign, directing the party's media work and closely advising Tony Blair, , and John Reid — who were the most prominent politicians in Labour's team.

recruited Campbell to manage relations with the press for the tour to New Zealand in 2005. The appointment proved to be controversial with Campbell being roundly criticised by many in the media for his predilection for spin (hence his nickname, Spin Supremo) and for his lack of rugby knowledge and experience. They also resented the fact that Campbell wrote an exclusive column for "" during the tour, which they saw as a . However on the unsuccessful Lions' return to the British Isles, Woodward praised Campbell for having done a "fantastic job".

Campbell is generally regarded as believing in a more traditional form of Labour politics than Tony Blair. His partner, Fiona Millar, has openly opposed Labour policy on education, sending their children to comprehensive schools. Since his retirement from Downing Street, Campbell has been highly critical of political reporting, more specifically the "" and its editor . Campbell attempted (without complete success) to shield his children from the press attention that their father's job attracted. When briefing the press, he was known for a no-nonsense approach, but did on occasion alleviate it with humour: after a series of notably poor predictions about a Government reshuffle he distributed CDs by the band Garbage to those reporters who had made the most errors. "Garbagic" was the polite, made-up word Campbell used to describe a story he did not like.

A regular feature of "" is a satirical version of Campbell's discussions with Tony Blair, in which plays Blair and Andrew Dunn plays Campbell. In 2005, Campbell was played by in the television film "The Government Inspector", based on the David Kelly Case. The following year, he was portrayed by in the film "The Queen". , who portrayed in "The Queen", portrayed Campbell in the television drama "A Very Social Secretary".

's character, Malcolm Tucker (an aggressive, foul-mouthed Scottish Director of Communications), in the critically acclaimed 2005 BBC television satire, "", is thought to be directly based upon Campbell — however, the series' creator, , has said that the character is a more general personification of a specific type of government official.

Throughout his time in Downing Street, Campbell kept a diary which reportedly totalled some two million words. Selected extracts, entitled "", were published on 9 July 2007. Perhaps predictably, subsequent press coverage of the book's release focused heavily on the issue of what Campbell had chosen to leave out, particularly in respect of the often allegedly fractious relationship between Blair and his Chancellor and successor, Gordon Brown. Campbell, who has expressed an intention to one day publish the diaries in fuller form, indicates in the introduction to the book that he did not wish to make matters harder for Brown in his new role as Prime Minister, or to damage the Labour Party.